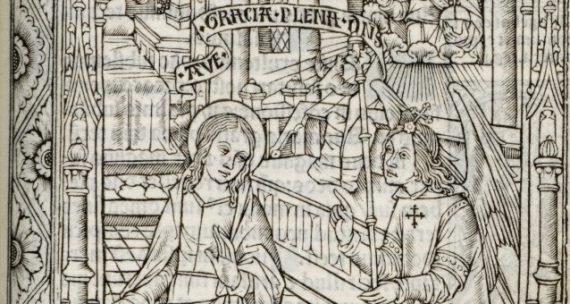 Wednesday, 25 March is and was the date traditionally know as ‘Lady Day’, the Feast of the Annunciation, marking the visit of the angel to the Virgin (hence ‘Lady’) narrated in the first chapter of the Gospel of Luke. One of the most frequently depicted scenes in western Christian art, the Annunciation very often employs an image of the Virgin kneeling to read, while the Angel Gabriel appears, often with the first words of his message (‘Ave Gratia Plena, Dominus [tecum] – Hail, full of grace, the Lord [is with thee]’) in the form of a scroll. God the Father often appears towards the top of the image, with the Holy Spirit depicted descending towards the figure of Mary. Once Mary’s reply (‘Be it unto me according to they word’ in the AV) is made, the events of another quarter day, Christmas Day, are set. Annunciation from a Book of Hours printed on Vellum, ca. 1500

The image we present here is taken from a Book of Hours here at Chetham’s Library, a book which was part of the gift of the library of Manchester scholar, shorthand master and hymn-writer John Byrom (1692-1793) (More on his life on our blog here, and on his collection here). John Byrom in his youth

This easily portable little book presents a series of Catholic devotions that would have been universally familiar to pre-Reformation peoples from across Western Europe and beyond, and contains sets of prayers to be said at the various hours of the day (hence Book of Hours). Manuscript copies (of which Chetham’s has three, and many other great libraries have many more) are often illuminated with rich colours, but with the automation of book production represented by printing with movable types, the Book of Hours was an obvious choice for the printer. This image comes from the “Little Office of the Virgin”, that’s to say the prayers specifically to commemorate Mary’s role in salvation, and the most popularly prayed and reproduced. The cycle, like the much more extensive offices for clergy to say through the day, draws most of its text from the Psalms. Our copy is printed with several more “little offices”, and more besides, making it a one-volume library of devotional prayer. If you search ‘Tabula omnium officiorum et orationum’ in our printed books catalogue, you will see how many things it includes.

The book in hand here may be regarded as distinctly a ‘luxury’ edition, printed on vellum (or for manuscript people, parchment; the terms are usually interchangeable) rather than paper, and hand finished with illuminators’ colours of red and blue, and with gold leaf. The story of the Annunciation in Luke, Chapter 1, in the Library’s Wycliffite New Testament manuscript

The illustration shows a page of one of the Library’s Middle English manuscript, which presents a text of the New Testament in a translation ascribed to the Oxford scholar John Wycliffe: ‘The angel Gabriel was sent fro God into a cite of Galilee whos name was nazareth to a maiden weddid to a man; whos name was ioseph, of the hous of davits, and the name of the maiden ws Marie, and the angel entride to hir and said hail ful of grace : the lord be with thee. blessed be you among wymen’.

To return to the quarter days, much significance attached to the spring quarter day, Lady Day, in addition to its religious and liturgical significance. Along with the other quarter days in England (Christmas Day, the Nativity of St John Baptist on 24 June and Michaelmas on 29 September), it was a day for the payment of rents, settlement of debts, and of course, a feast.

Lady day was, until 1752, the most significant quarter day in that it also represented the beginning of the New Year. Only after this date did 1 January become used for official purposes, even though 1 January was celebrated. This is one meaning of the two significant uses of the phrase “Old Style” describing a given year – the other is the belated adoption in England of the Gregorian calendar (used now in most of the world) to replace the Julian calendar, which had crept out of synchronisation because of its failure to allow for the earth’s orbit of the sun not being measurable in complete days. Confused?

In the sense of New and Old Style years that have to do with Lady day, we can’t do better than quote from an excellent explanatory example from this excellent Wikipedia article :

“From 1155 to 1752, the civil or legal year in England began on 25 March, so for example the execution of Charles I was recorded at the time in parliament as happening on 30 January 1648 (Old Style). In newer English language texts this date is usually shown as “30 January 1649” (New Style). The corresponding date in the Gregorian calendar is 9 February 1649, the date by which his contemporaries in some parts of continental Europe would have recorded his execution.”

So Happy New Old Style Year, everyone! We hope you’ve enjoyed Lady Day indoors; do come to see the Library once we’re all liberated again!