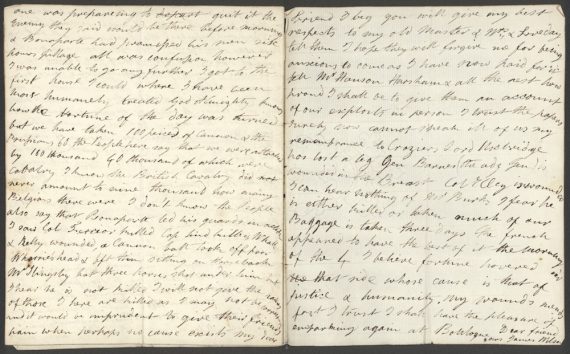 As I think you, and the rest of my acquaintance, will like to hear a little of our proceedings, and I have time to tell them, tho’ not in much order for it, I shall give you a sketch. About one o’clock on the morning of the 16th June we received orders to march, we marched the whole day, and in the evening, we just got far enough to see the Battle finish, the British had no Cavalry, in the field and the Infantry were in consequence much cut but they suceeded [sic] in maintaining their [G]round. We remained on the field that night, the next morning the Cavalry shewed [sic] their front to the Enemy, whilst the Infantry retreated. The french [sic] did not advance, at length we were ordered to retire and just as we got to a large Road there came on the most dreadful storm of Thunder and rain I ever witnessed [.] [W]e continued to move slowly on for some time, when lo! in a moment we got the word “Halt front”. “[T]he first Life Guards will prepare to attack”, we fronted but saw no enemy, the word was then given “Three’s about” (but by whose fault I do not know) and some seconds elapsed before the then front of the Reg could be made to face about. The Lancers were at a charge within thirty yards of us. I thought we were disgraced for ever. Capt Kelly took the command and cried out “follow me follow me”[.] [T]he men did so, and we made

as rapid a charge along the road in a column of Divisions as ever we made on Wimbleton [sic] Common, but not quite so well dressed. Capt Kelly cut down the first he overtook & they soon were strewed pretty thick five or six of them tumbled one over another in their haste to escape, we drove them about 400 yards back on their main body and then retired at a walk. [T]heir Gun’s [sic] were playing very sharply on us, but fortunately they were pointed too high to do us much mischief, they threatened us twice more but as we began to gallop to them they were off and we catched [sic] only & then an odd one whose horse could not go so well or fell in our first charge[.] [W]e released several of the 7th who had just been made prisoners[.] [W]e were now relieved by the Blues but the enemy would never come near enough to feel their swords but kept cannonading[.]

& on the 18th came on that Battle which I shall remember as long as I live[.] [S]urely there could never have been one more obstinatly [sic] contested[.] [T]he Enemy must have I think four Guns to our one, for eight or ten hours on an immense Plain the shot and

shells flew among us oftener than the strokes of a clock pendulum. We charged several times this day and repulsed the Enemy in all but one[.] [T]his was about four in the afternoon and our Brigade was not above the strength of two Squadrons[.] [A]n immense Column of Cureassier [sic; cuirassier], came down on us & we were obliged to retire the 23d I think it was ???? them in flank & stopped them a moment but they were forced to retire or they would have been surrounded[.] [T]he enemy followed us about 150 yards untill [sic] they came between two Squares of Infantry & then they were forced to be off as quick as we had been but we durst not follow them but very little way [.] [T]he nearer night approached the more hot the battle became[.] [O]ur cavalry cut to peices [sic][,] our Infantry formed in Squares[.] I thought it was impossible to save Brussells [sic][.] Where the 7 [or 1?] Dragoons Guards were I know not but ours the Blues & the 2nd about a Squadron strong were just advancing to charge a line of Infantry when I received a musket Ball through my neck[.] [F]ortunately my horse was able to carry me to Brussels. [S]o many of our officers were at this moment either killed[,] wounded or dismantled that the commant [sic] fell to LW Dobson & he was almost instantly wounded by a shell. When I got to Brussells [sic] everyone

Bonaparte had promissed [sic] his men six hours pillage[.] [A]ll was confusion[,] however I was unable to go any further[.] I got to the first house I could where I have been most humanely treated[.] God Almighty knows how the fortune of the day was turned but we have taken 100 peices [sic] of cannon & the Prussians 60[.] [T]he People here say that we were attacked by 160 thousand[,] 40 thousand of which were cavalry [.] I know the British Cavalry did never amount to nine thousand [,] how many Belgians there were I don’t know [.] [T]he People also say that Bonaparte led his guards in action [.] I saw Col Ferrior killed[,] Cap Lind [?] killed, Whall [?] & Kelly wounded, a Cannon ball took off poor Wharrie’s [?] head & left him sitting on Horseback. M Slingsby hat [sic] three horses shot under him but I hear he is not killed[.] I will not give the names of those I here [sic] are killed as I may not be correct and it would be imprudent to give their friends pain when perhaps no cause exists[.] My dear Friend[,] I beg you will give my best respects to my old Master & Mrs, & Loveday[.] [T]ell them I hope they will forgive me for being anxious to come as I have now paid for it[.] [T]ell Mr Hanson Harsham & all the rest how proud I shall be to give them an account of our exploits in person[.] I trust the papers surely now cannot speak ill of us [.] [M]y remembrance to Croziers [.] Lord Uxbridge has lost a leg [,] Gen Barnes (the ady[?] Gen) is wounded in the Breast [,] Col Elley is wounded [.] I can hear nothing of Mr Burks [,] I fear he is either killed or taken [.] [M]uch of our Baggage is taken [.] [T]hree days the french [sic] appeared to have the best of it[.] [T]he morning of the 4 I believe fortune hovered in that ride whose cause is that of justice & humanity. My wounds mends [sic] fast[.] I trust I shall have the pleasure of embarking again at Boulogne[.] Dear friend[,]