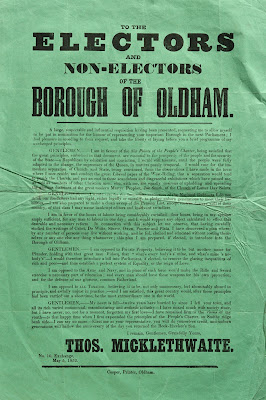 This radical manifesto addressed to “the Electors and Non-Electors of the Borough of Oldham” was produced by Thomas Micklethwaite, who proposed to stand for election for Oldham in the General Election of 1852.

Micklethwaite, the proprietor of the Wakefield Journal, was a frequent participator in local debates. In addition to advocating the abolition of taxation, all private property, and the extinction of the National Debt, he also planned to introduce a four-hour working day: “four hours, in my opinion, being amply sufficient for any man to labour in one day”. He was against the Army and Navy, and suggested instead that each individual should be the owner of their own rifle and sword “for his own protection, and for the defence of our glorious, common Fatherland”.

Nor was this all. Impressively, Micklethwaite claimed to have “discovered a plan whereby any number of persons may live without working, and be fed, clothed and educated without costing themselves or any one else any living thing whatsoever”. There was a caveat to this great proposal however: “This plan I am prepared, if elected, to introduce into the Borough of Oldham”. A sad reflection, perhaps, of the empty promises of politicians since time immemorial. As he appears never to have actually stood for election, his cunning plan has been sadly lost, not just to the electors of Oldham, but to us all.