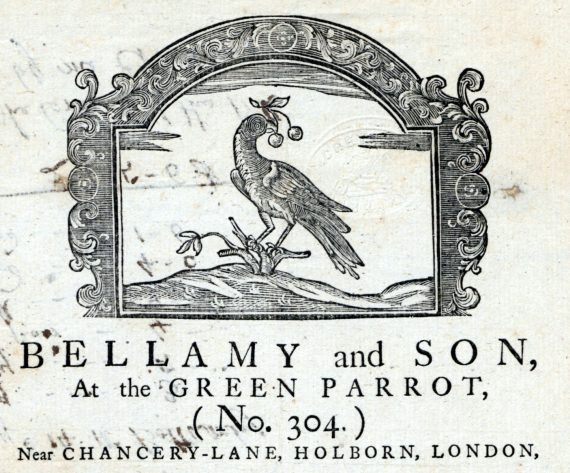 Welcome to the age of consumerism! The 18th century has arrived, bringing the birth of the industrial revolution, the spread of global trade and capitalism, empire, and the abhorrent transatlantic slave trade. The Flying Shuttle, the power loom, the steam engine, the Spinning Jenny: new inventions are changing manufacturing for ever. Machines are replacing human and animal labour, and production is moving from homes into factories. Living standards are starting to rise as incomes increase and falling prices are giving some people greater purchasing power to buy more food, clothes, and household items; although abject poverty persists alongside. Our collection of trade cards dating from the early 18th century shows us some of the desirable consumer goods of this era.  These single sheet cards are a combination of advertisement, bill and miniature works of art.  They advertise the tradesperson, their offer and location, and vary in size from Manchester collector of old rags and clothes James Gates’s compact 12cmx11cm card, to the Hawkins Warehouse’s larger 29cmx21cm sheet. They often include information to attract customers: Thomas Davis’s selling point is his position as purveyor to His Royal Highness the Prince of Wales and the Princess Dowager of Wales, and he assures customers that the different kinds of water on offer are only collected in the proper season. Visual appeal is important and layouts range from very simple letterpress sheets, showing only the name and address of the business and their trade, to ornate designs decorated with borders and illustrations. Renowned engravers, even Hogarth in his early years, often produce the engraving. Decorated cards are produced from woodcut illustrations or engravings cut into a metal plate. They are then inked and put through a press before each sheet is hung to dry, a labour-intensive process which limits the number of prints to around a hundred.  This reinforces their status as art objects for rich customers. The cards in our collection illustrate some popular 18th-century luxury food and drink items.  The health, nutrition and cosmetic benefits of donkey’s milk have been known since ancient times to the present day. Pope Francis has said he drank donkey’s milk as a child, and interest in its health benefits is increasing, although it is not widely available in the UK.  In the 18th century physicians believed it could cure general weakness, lung, blood and emotional problems, and babies were sometimes fed on asses milk.  It was expensive and sometimes in short supply, as female donkeys only produce one or two litres of milk a day.  Robert Parker offers customers the opportunity to buy milk from his yard, or other London locations, or to buy, sell or rent an ass to keep at their home. Rising incomes meant that the new baked goods that had grown in popularity during the previous century were available to more people, able to afford pastries, puddings, cakes and biscuits.  Imported sugar and spices were transforming baking, and sugar consumption doubled between 1690 and 1740. The repugnant slave trade grows, fuelling the production of sugar, molasses, rum, tobacco and raw cotton in the Caribbean and the Americas, sold back in Europe for a hefty profit. Although an abolitionist movement grows from the 1780s, consumer demand continues to drive the expansion of slave plantations. The true horrors of production are concealed in Hawkins’s sanitised advertisement for opulent fabrics. The accounts on the reverse of many of the cards in the collection give us an insight into these commercial transactions. These handwritten documents show us customers’ names, what they bought, what they paid, and the date. Wealthier customers buy items on account and settle when the bill is issued at a later date. When they pay, the card functions as a receipt, often marked with ‘received the contents in full’ and signed by the proprietor or a staff member.  Several of the invoices in the collection relate to Mary Archer, who purchases tarts and puddings to the value of 11 shillings and a penny in January and February of 1766 and pays in full. She also pays Hawkins warehouse for three coats in 1743, as executrix and administrator to the Hon Sir Michael Newton. These trade cards and many other treasures can be found in the Halliwell-Phillipps collection, which has been fully digitised and is freely available online – you can access them through the library’s online catalogue. The digitisation was completed in March 2017, made possible by a grant from Arts Council England and the hard work of Digital Project Officer, Susana Sanchez Gonzalez.