Pomona Gardens was one of the most important pleasure gardens in nineteenth-century Manchester. Pomona was opened in 1845 by William and Joseph Beardsley who leased land in Stretford from Sir Thomas Joseph de Trafford. The site was immediately south of the Cornbrook and east of the river Irwell, about one and half miles from the centre of Manchester, but was close to Hulme, one of Manchester’s most populous townships.

The new gardens were small but were within easy walking distance of Manchester, and were advertised a place to ‘enjoy all the pleasures of a rural fete, without the expense of a railway trip’. In the absence of other attractions, much was made of the air, ‘free from the impurities of the Manchester atmosphere’. Though lacking a zoo, Pomona had attractions such attractions as a shooting gallery, billiard room and camera obscura as well as flying swings, archery ground, bowling green and a hedge maze. 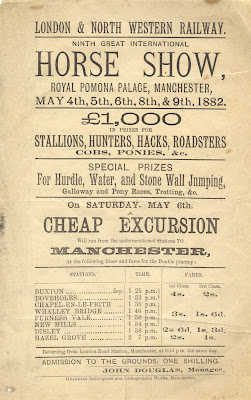 Following the purchase of the gardens by James Reilly in 1868, Pomona developed into a new form of covered entertainment. The Royal Pomona Palace, as Reilly called it, at some 216 feet long and 220 feet wide, and 60 feet high, was largest such hall in the country, capable of accommodating at least 20,000 people. Pomona was transformed into a place where political rallies were held, but also to a place  where young people met and chatted, drank and danced largely without apparent adult supervision.

To the Jennison family, owners of the rival Belle Vue Zoological Gardens, Pomona was the zoo’s main competitor. They were relieved when Pomona collapsed in the 1880s, falling victim to increasing urbanisation, and by the 1880s the site was surrounded by factories. In 1883 it was decided that four of the docks of the proposed Manchester Ship Canal would be built on Pomona Gardens and although it struggled on the Gardens finally closed its doors in 1888.

We have few artefacts and mementos of Pomona but have recently acquired a trade token and a railway handbill for the Annual Horse Show of 1882. The horse show, a new venture for the north of England, was introduced by Reilly in 1874 and was extraordinarily popular, receiving over a hundred thousand visitors in its first year.

With thanks to Terry Wyke of Manchester Metropolitan University.