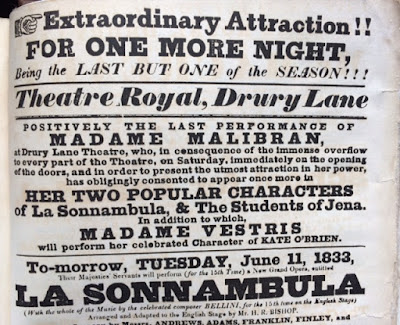 On this day in 1836 Madame Maria Felicita Garcia Malibran de Beriot died aged 28 in Manchester. Malibran was a mezzo-soprano who commonly sang both contralto and soprano parts and was regarded as the greatest singer of her day. She died following a performance at the Manchester Music Festival at the Collegiate Church. Apparently Malibran was spurred on by rivalry with another singer to repeat a duet and ‘annihilate’ her colleague. The effort proved too much. Following her return to her hotel, the Mosley Arms, she collapsed and died shortly before midnight. The church authorities agreed to bury her and a crowd of over fifty thousand followed her cortege as it made its way to her funeral. Shortly afterwards her body was exhumed and reinterred in a mausoleum in Laeken Cemetery, near Brussels.

This broadside of her performance of Bellini’s La Sonnambula at the Theatre Royal Drury Lane, dates from 1833.