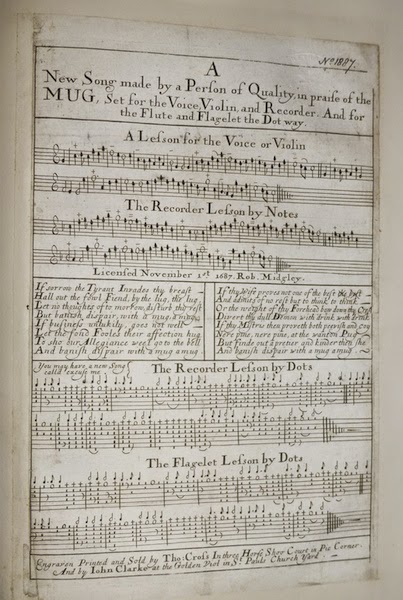 Nothing like a good drinking song to get Monday off to a swing. We’ve had some interesting correspondence with Dr Douglas MacMillan concerning ‘If sorrow the Tyrant’, one of our Halliwell-Phillipps music sheets. While we are fond of a good tune, especially one accompanied by a mug or two of ale, we will let him explain the reasons he finds it interesting. If you are not a musician, hang on to your hat, this gets technical:
If sorrow the Tyrant 1687
This song ‘Set for the Voice, Violin, and Recorder. And for the Flute and Flagelet the Dot way’ is a song in praise of drinking to drown one’s sorrows in respect of business difficulties, marital problems and inadequate mistresses.

Described—as is customary in the late seventeenth century—as a ‘lesson’ for the voice or violin, the tune is given with indicated ornamentation. Following this, the melody is repeated a fourth higher with slightly altered ornamentation and described as “The Recorder Lesson by Notes”. Below this, “The Recorder Lesson by Dots” gives the melody in tablature but in the same key as the music for voice and violin. The flageolet part is likewise given in tablature for a flageolet with a sixth-finger note of D, again in the tonic key.
The transposition of the recorder part is of considerable interest. The voice and violin melody does not fit on the common alto (treble) recorder in f’ because of two occurrences of e’, a note not obtainable on the instrument: there is some contemporary evidence that players of the alto would simply omit these two notes, or transpose the octave. Buse notes that transposition of an entire melody was sometimes undertaken to place the recorder part within the instrument’s range, but there is no suggestion of this practice in If sorrow the Tyrant.1Two solutions are given: firstly, the recorder part in staff notation transposes the melody up a fourth. If the player of a recorder in C (soprano/descant or tenor) were to use alto recorder fingering, the melody would sound in the tonic key as on the violin. The second option is provided by the version for the recorder using tablature. In this case, an instrument in C is required, either a soprano or tenor. 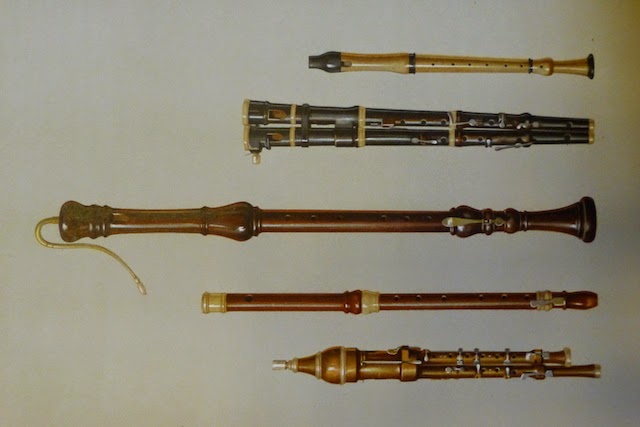 This poses something of a conundrum, for there are no references—to my knowledge (September 2014)— to the use of C recorders in England at this period. The practice of upward transposition of a fourth became common in writing for C recorders in the early eighteenth century but If sorrow the Tyrantsuggests an earlier use of the practice.2The use of tablature for the recorder was relatively uncommon and few—if any—English small recorders survive from the late seventeenth century. This apparently simple song, set also for instruments, presents a wealth of insight into the practice of writing for the recorder in the late seventeenth century.
1 Buse, ‘For the Flute’, p.209.
2MacMillan, ‘The Small Flute Concerto’, p.92.
Chromolithograph illustration of ‘Two double flageolets, a German flute and two flutes douce’ from Musical instruments, historic, rare and unique by A. J. Hipkins illustrated by a series of fifty plates in colours drawn by William Gibb. Edinburgh: Black, 1888.