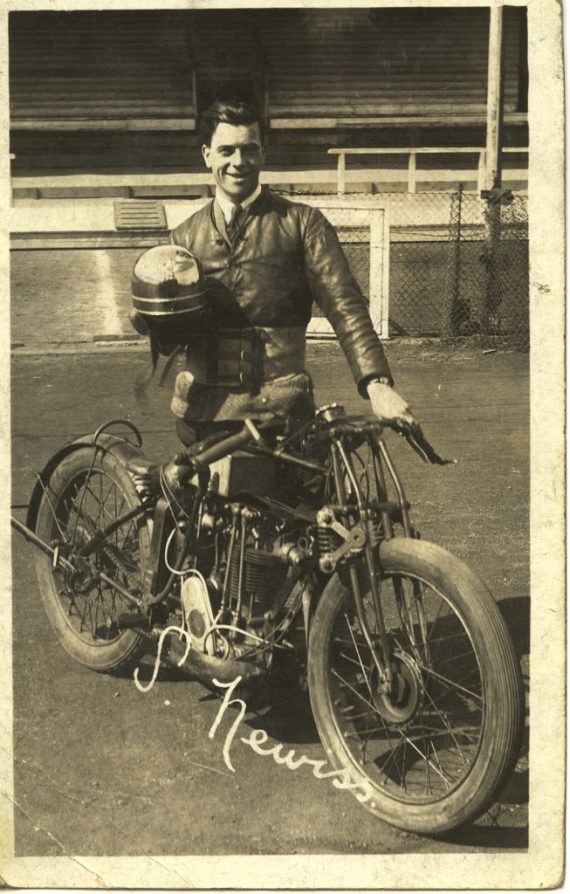 The volunteers at Chetham’s Library have been working hard to expand the collections on the Virtual Belle Vue webpage. A collection kindly given to the library by Paul Swarbrick (not, as this page previously read, Eunice Dodgeon, who compiled one of the scrapbooks in the Belle Vue collections) has now been digitised and uploaded to the Virtual Belle Vue site by Ciara Foley, an MA Public History and Heritage student from Manchester Metropolitan University. Our apologies to Mr Swarbrick for the error.

Mr Swarbrick has given us his own biographical notes on Syd Newiss’s glory-filled, but brief career: “Syd Newiss’ career was short lived; having won the Golden Helmet in 1929 he, as you will probably know from the blog, toured South America and the U.S.A with the England team at the end of that year. In the 1930 season Syd fractured his femur during a race and that brought an end to his racing days. He owned a garage on Ashton Old Road which many years later he sold to Maynes Coaches and then moved to Kent. He died in July 1984 in Kirkham, Lancashire.”

The collection contains many items that were previously owned by Syd Newiss, a Speedway racer who was a member of the Belle Vue Aces, born in 1909. Newiss first made his riding debut in 1923 when he rode at Audenshaw and had been described as a ‘consistent racer’ by the local newspapers. Newiss took part in the Speedway tour of Buenos Aires from September 1929 to the early months of 1930 with his fellow team mates. The tour included many trips through the streets of Buenos Aires, showing off their riding skills and also competing in races at the Club Athlético Huracán. The Speedway team also had fun aboard the liner ‘Royal Mainline’ and the collection has many pictures of the team aboard ship and playing games. Other team members that joined Newiss in Buenos Aires were popular riders such as Bob Harrison, Oliver and Oliver Langton, ‘Sprouts’ Elder and ‘Dusty’ Haigh.
This collection includes many photographs of Syd Newiss, team mates and fans on tour in Buenos Aires. It also contains racing programmes, Argentinian newspaper articles and guidebooks from the tour, showing what the team got up to during their months abroad. Syd Newiss also collected signed postcards of the Speedway team, as well as Belle Vue programmes and newspaper articles from Manchester and other local areas. The collection also contains scrapbooks made by Newiss himself, that offers an insight into his interests and there is another scrapbook in the collection from Eunice Dodgeon.
We are hoping to gain more information about the Buenos Aires tour of 1929 and about the Belle Vue Aces team during that time, so we are calling for readers and Speedway fans to have a look at the colllection and either email us at librarian@chethams.org.ukor write in the comments box below the collection.
The Belle Vue Gardens. Newiss Collection can be viewed at http://www.chethams.org.uk/bellevue/collections/show/10