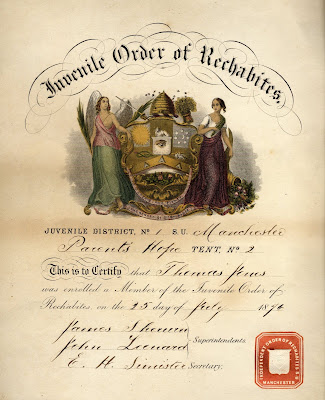 Enrolment certificate for the Juvenile Order of Rechabites dated 1874, belonging to Thomas Jones.

The International Order of Rechabites were a temperance friendly society founded in 1835. Friendly societies were intended to provide mutual support to groups of individuals with a common interest or employment, but meetings were generally held in public houses, a practice which made it difficult for supporters of the temperance movement to attend. Temperance friendly societies were therefore set up to allow teetotallers access to the benefits of mutual association.

The Rechabites took their name from a Biblical tribe who were commanded to ‘drink no wine’, and named their branches ‘tents’, the first of which was set up in Salford. In common with many enthusiastic nineteenth-century societies, a junior section was established to capture the early interest of children and young people.

The Order modelled their ritual and structure on Biblical practice, attaching great importance to insignia, regalia, ceremony and hierarchy, all of which was intended to give each member a sense of identity and progression, as well as to distinguish their order from other organisations and socieities.