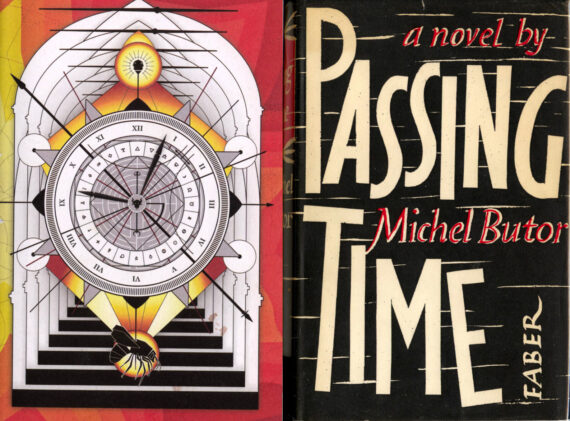 A change of pace for the Library blog this week with the story of the republication of a Manchester novel with a difference. Over to Pariah Press publisher, Jonny Walsh:

Passing Time was first published in French as L’Emploi du temps in 1957. A psycho-mythological murder mystery set in a dank, labyrinthine, reimagined Manchester. Author Michel Butor worked as a teaching assistant at the University of Manchester 1952-3.

THE MINOTAUR AT THE CENTRE OF THE LABYRINTH IS YOU

Suddenly there were a lot of lights …

“… Passing Time. You heard of it?” And so it began.
Both keen paragliders, Danny Moran first mentioned the work to me during a trip we took to Wales. Appropriately enough, soon afterwards, we were high above the caerdroia in the north of that country. Actually, I hadn’t heard of the book. It had escaped my ken, somehow. Though I had the vaguest memory of a cousin mentioning it to me, during a wedding in France years before. Speak memory! a most capricious thing … Faltering memory, recapture — thematic elements of Passing Time that soon, strangely, bled into this whole process. The book itself a kind of hyperstition — entirely in keeping with Butor’s intentions, I would come to believe.

Back to terra firma: for some months I searched for an edition of the work with little luck. Second-hand copies are to this day prohibitively expensive to buy, unless you’re a Butor tragic — which unfortunately I have become. Ever the gent, Andrew Biswell guided me in the direction of Chetham’s Library who, remarkably, appear to have had the only extant version of Passing Time in a library in the north of England. The handsome Faber hardback, UK first edition. And, a fine copy it is — though replete with sloppy errors, as we were to discover. 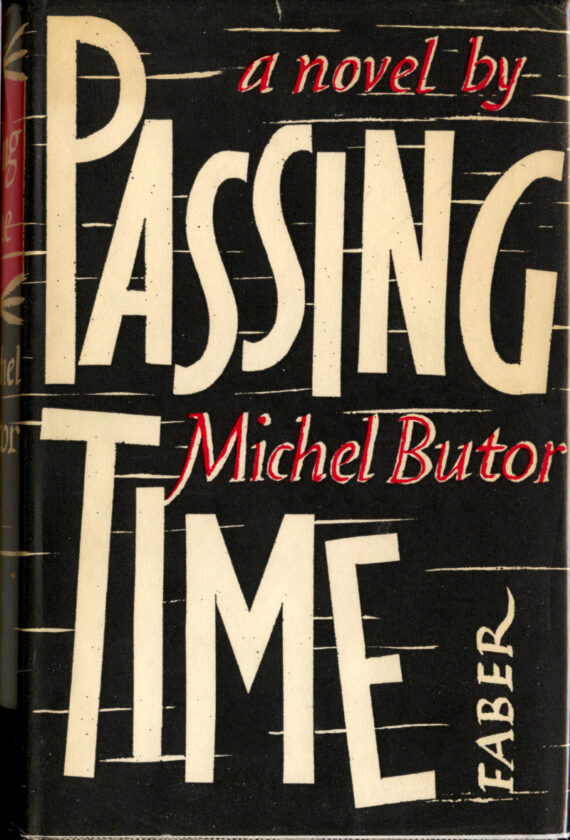 Fergus Wilde allowed me to sit in for a few afternoon sessions, to peruse the work. Sometimes, appropriately enough, in the very room of John Dee’s experiments with alchemy and divination. The book itself is separated into five sections (within those, five days per week Jacques Revel also records his impressions of events in his diary — L’Emploi du temps translated literally is timetable, a schematic of sorts). After a cursory reading of the first of those segments I immediately felt it was a work worth reviving. A text at least replete with intrigue, written with an economy of style about a thinly disguised Manchester, therefore publishable. Eventually, after much foraging I managed to conjure a not unreasonably priced edition (Jupiter, 1965 — the one with Butor and his pipe on the front cover, which now lies torn and frayed at the left hand corner of this desk).

The quest I undertook to source the licence for the work was extensive and appropriately labyrinthine. For much of the search I held out no hope of getting anywhere — ‘Of course, this is why no-one’s republished the thing for sixty years!’ Faber, no. Simon & Schuster, no. A letter to Editions de Minuit — translated into French by a friend — non. Potential former editors, nothing. The niece of a colleague from Butor’s backgammon circle in Cairo, zero. A full thirteen months of false starts, dead ends, about-turns, threads and clues. Perhaps I should have heeded Daedalus’ instructions. 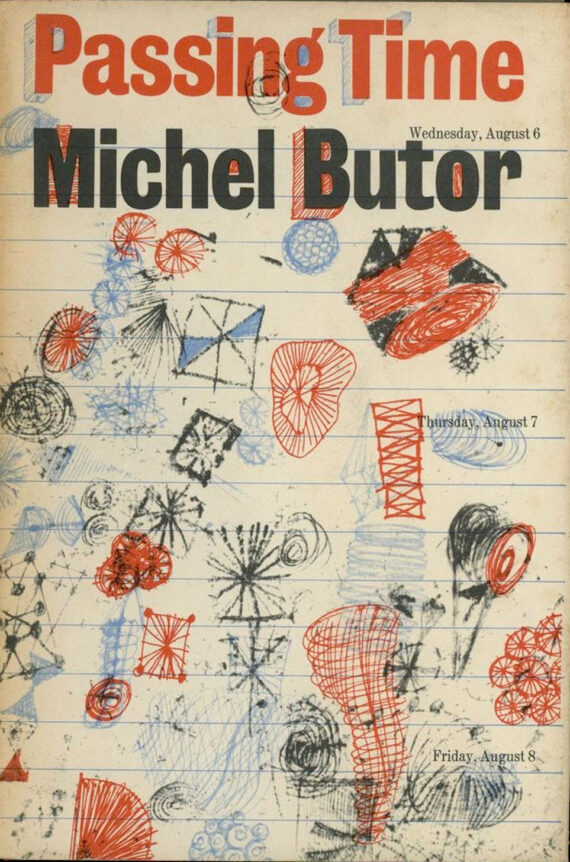 Cover of the 1960 Simon and Schuster edition of Passing Time : artwork by Robert Brownjohn

In the meantime, though I had strong doubts around the project’s present future, we thought it prudent to attempt to enlist the knowledge of the foremost Passing Time stan, Catherine Annabel. Who as luck would have it, was at that very moment completing her post-doctoral thesis on the book at the University of Sheffield. Cath graciously, quickly, gave a commitment to the project on the basis of a co-editorial remit. She was initiated into Pariah shortly thereafter — remotely, we were in a pandemic. Swiftly, we resolved to republish Jean Stewart’s excellent English language translation rather than commission a new interpretation — which would have been time consuming, a veritable word-minefield within a tricky text, and ultimately unnecessary as we felt enough people certainly hadn’t read the original. Our decision was later reinforced upon receipt of Butor’s correspondence with Peter Green of the Daily Telegraph: “Jean Stewart has made a lovely job of the translation – this text must have been a brute to deal with.” Butor himself a fan.

Every time I open it I see something I hadn’t seen before. It’s almost as if it’s shapeshifting, it grows and alters as I read. ~ Cath Annabel, Passing Time blog

As is often characteristic of such an odyssey, just as I felt all was lost, the moment to give up the ghost, to wind the machinery down until I could consider another angle of attack in the licensing search — or to move onto another book entirely perhaps — I was suddenly, serendipitously passed onto Alma Books — proprietor of John Calder’s catalogue — the Jupiter edition connection, the gravity of its orbit. Christian Müller proved a wonderful help in navigating these moments, though I suspect he has since moved on from Alma. Essentially, the publication rights are held by Editions de Minuit, but are thus represented by a literary agency in New York. Despite a pleasurable trip to Paris and Minuit to discuss matters, once Americans were involved things moved on at a pace (as is ever the case in this industry). A short negotiation of and payment for the rights to translation lead to Jean Stewart’s estate — a delight to deal with when thrashing out terms, and informative on the background to her wider works. 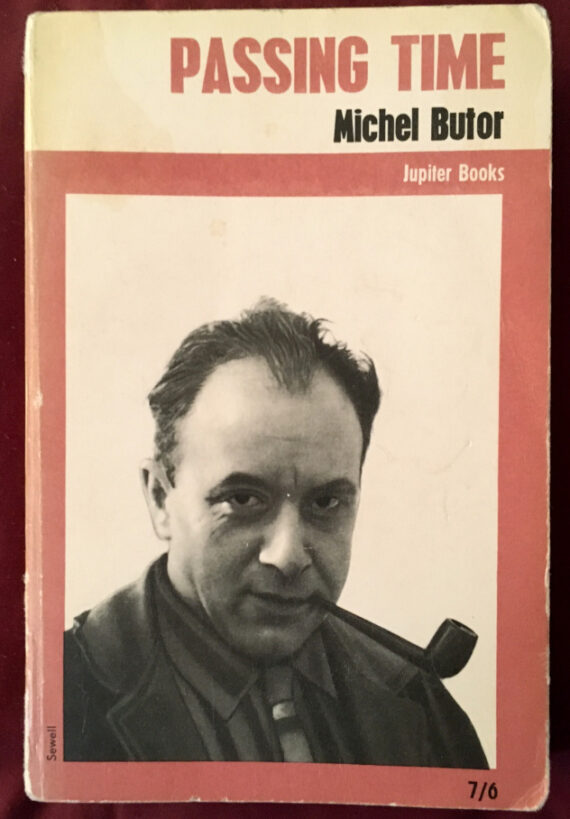 The Jupiter edition of Passing Time, 1965

The realisation that the text had never before been digitised, led to a mild flux. I have Graham Foster at the International Anthony Burgess Foundation to thank for walking me through the optical character recognition process, and alerting me to common pitfalls. The proto-typescript was then given a final tidying and typsetting by Alex Billington — his work accurate and patient throughout. With a freshly minted, clean-ish manuscript the editing process was established in earnest. Months of cross-checking the various editions and an alignment of the text with Pariah’s house style — a meld of Chicago and Oxford rules. Dispiritingly, we were struck by sheer number of typesetting inconsistencies and grammatical errors within each version. The most accurate in terms of presentation and care of approach is the 1960 Simon & Schuster, US edition (published some months prior to the Faber, UK version — which had been subject to mysterious further edits by a still unknown hand). Nevertheless, the Jupiter is perfectly serviceable in its unconventional demi size and still retains a very English 1960s feel. For instance, this dead-eyed irony from the rear cover blurb:

“The atmosphere of a British industrial town is perfectly captured, and this French view of England will delight British readers.”

Whilst we remained absolutely faithful to Jean Stewart’s rendition of the text, Cath cross-referencing to her Minuit first edition and her fluency in French were integral in settling many of the more thorny issues of translation. Ultimately, the concept I had in mind was that of a finalised, mass-market version of Passing Time. The numerous errors corrected and archaisms up-dated, with a thorough effort to eliminate the vagaries of the older editions, including the French. It was a pleasure working closely with Cath upon that aspect of the book.

The tightness of the typesetting was an intentional departure from the other, more spacious, Pariah paperbacks — whilst still retaining elegance and economy within. [We will persevere with the a-format, pocketbook size so long as I have breath … if you must know, it is a nod to the Penguin Modern Classics editions from 1998-2001, see: One Hundred Years of Solitude, What a Carve Up, etc.] As ever, the holistic reasoning behind the font choices is told within the book itself. The symbolist and semiotic cover art came about after designer Steven Cherry had sent me much remarkable imagery from the back of his brain to the computer screen without even reading the book beforehand. My only promptings had been “a skewered bee – the text is almost anti-Manchester”, and the words ‘fire’, which became the background and ‘diary’, that was converted to the more visually dynamic clock face and its correspondences. Once the design was honed and (rapidly) submitted I suggested the addition of Janus and slight alterations to the alchemical symbols on the clock face. Cherry has a knack for the uncanny, a quiet brilliance. 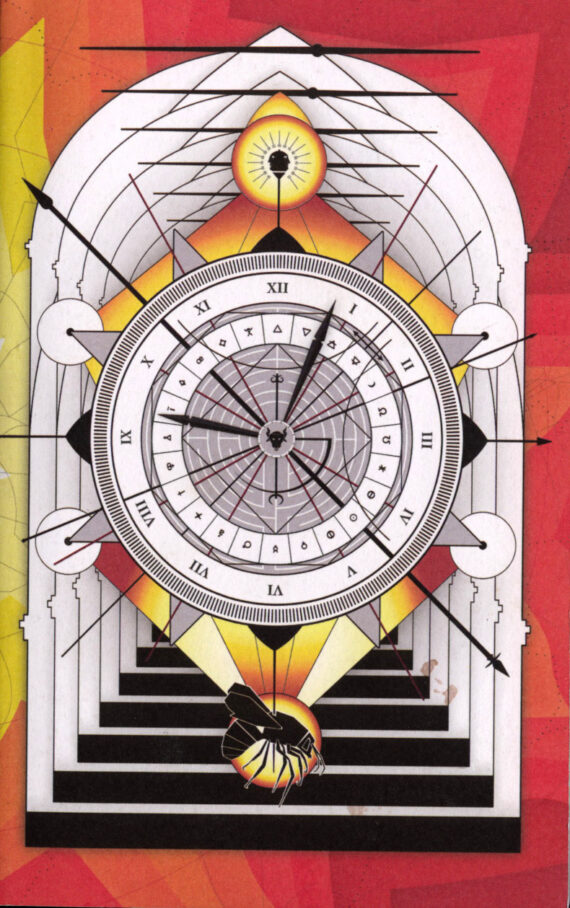 And what of the book? I’m onto my fifth reading. A primary attraction is its polyvalency, its ambiguities and the deep, rich language employed. Some of the descriptive sections of Lanark suggest Alasdair Gray was familiar with the work. It is a Mancunian sightseeing trip and a type of noir-spoof on the mid-century detective novel. An esoteric, alchemical allegory of the hero’s initiation — characterised by a repetitive incantatory phrasing, a spiralling of words growing tighter as we move through the labyrinth (rather than a maze — the distinction, though not always commonplace, is crucial). An anti-capitalist screed. A rumination on the unstable essence of kairos. A retelling of the Theseus myth. A by-turns funny yet poignant meditation on exile, alienation and blighted mental health, and therefore a type of memory palace in reverse — anyone losing control of their memory is a person bewitched, subsumed on a subconscious level — Revel lost in the chaos of iconography. Is there a zodical element at play within the calendrical structure of the work — Taurus, the bull/minotaur at its centre — a vague whiff of the Mithraic temple found in Hulme (references to mystery schools abound in the text)? Does a system of correspondences underpin the narrative (Liber 777, Agrippa, pseudo-Solomon?), an alchemical apparatus to effect personal change in Revel? And just what does he do on 29th February (there was a leap year in 1952)? Let us know.

Neurosis and initiation are the same thing, except that neurosis stops short of apotheosis, and the tremendous forces that mold all life are encysted—short circuited and turned poisonous. ~ Jack Parsons

Passing Time was eventually republished on 7th June (a unique diary entry in the book itself) 2021 to little fanfare and no early reviews. I’m grateful for Cath’s connections which resulted in a couple of early blog pieces — culminating in many more initial sales in the USA than in the UK. Thankfully, the work has since been taken up by the great and the good of UK book retail — our reps seem to have done a decent job on what is not the easy sell. As per Butor’s insistence that Bleston is a totem for any industrial city, we’ve found much more of a readership, so far, in the UK’s post-industrial heartlands (as well as the the US). More recently, journalist Sophie Atkinson wrote a terrific review for the The Baffler, out of New York, and one of a more personal tone for The Mill in Manchester. As it currently stands, we’re working on an interactive map of Bleston, via UCL, which should be available before Christmas. There is ongoing talk of Butor talks, events, salons. Bleston will live on, the labyrinth awaits you.

None of this discourages me, because I have seen, I have heard, and I have felt. ~ Emanuel Swedenborg

More on Cath Annabel’s work on the book can be found … https://cathannabel.blog/category/literature/michel-butor/