Prince Albert and his memorial 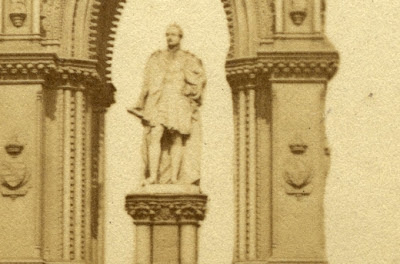 On this day in 1867 the Albert Memorial in Manchester was unveiled. It took several years of very slow progress by a committee set up to provide an appropriate memorial to the former Prince Consort, who died in December 1861.

The committee was chaired by Mayor Thomas Goadsby, who decided to offer the town a marble statue of Albert, the sculptor of which was to be Matthew Noble. Thomas Worthington, the Manchester architect, was invited to provide a magnificent shrine-like canopy to house the statue.

The minute book of the Albert Memorial Committee, which was given to the Library by Colonel A.F. Maclure in 1924, records the progress of the scheme. Although the initial intention had been to fund the memorial largely by public subscription, an additional grant of £500 had to be made by the City Council in 1866 to meet the cost.