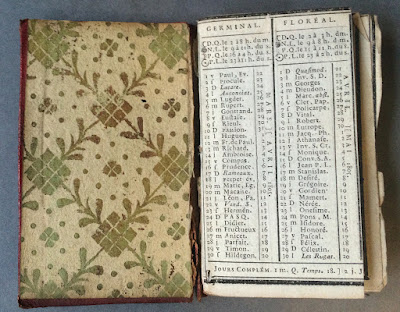 In 1655 when the first books started to arrive at Chetham’s Library they were shelved according to size, with little books on the top and the biggest books on the lowest shelves. It was a very space-efficient system, however, it did mean that eventually books on a particular subject, law or medicine for example, could be scattered across many shelves from one end of the library to the other. It must have been quite a challenge to locate books in the early days of the Library as, until 1791, the only catalogue available was a handwritten list in Latin. Fortunately, although we still use the ‘fixed location’ system, we now have an electronic catalogue, so it is easy for remote library users (and those who aren’t fluent in Latin) to ‘browse by subject’ online before travelling to the Library.

One of the serendipitous aspects of the fixed location system is the curious mixture of books which can be shelved side by side – retrieving an item from shelf 8.5.F a couple of weeks ago became quite a voyage of discovery!

8.5.F is a shelf in our rolling stacks which contains 48 very small books . The books are printed in several languages – 35 of them in English, two in French, two in Latin, one in Greek, and eight somewhat mysteriously classed as ‘undetermined’.The earliest book dates from 1638 and the most recent from 1970. The following is a selection of some personal favourites from the shelf.

The oldest book on the shelf  is a modest looking catechism, written by Alexander Nowell in Greek and Latin. It was published in 1638 and is in its original binding, described as ‘brown calf with plain, blind-tooled double fillet border’. However, pasted inside its cover is a splendid armorial bookplate, which indicates that a former owner was Edward Howard, Duke of Norfolk (1686-1777). 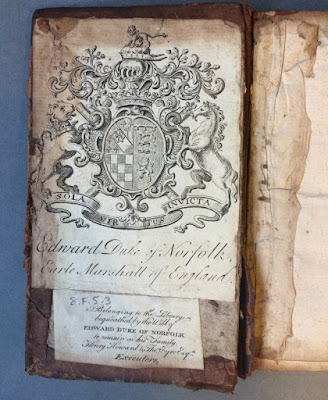 The newest book is Six fairy tales from the Brothers Grimm / with original etchings by David Hockney. Hockney’s distinctive, spidery, black and white etchings illustrate stories such as Rapunzel and Rumpelstiltskin, which the artist described as ‘really quite mad when you think of it …’ 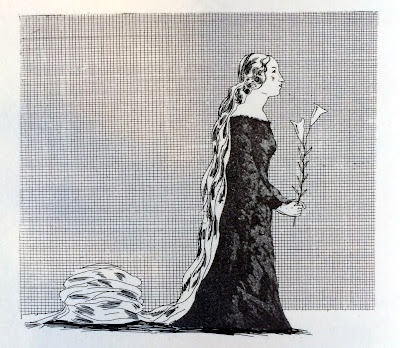 An unpublished MS notebook with English and Japanese phrases, 1890s? Handwritten in a slim orange notebook, this is a personal phrasebook, but we have no clues as to who it belonged to or why they were learning Japanese.

On the first page listed under ‘A’ are: 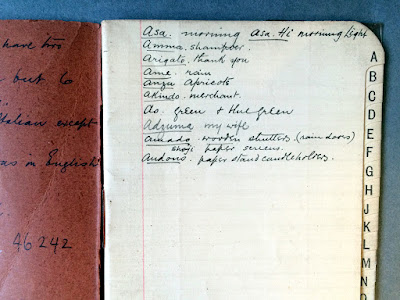 The smallest of all the books on 8.5.F is entitled Les delices de la mode et du bon gout, which roughly translates as ‘the delights of fashion and good taste’. Bound in crimson and gold leather, with gold patterned end papers, this French almanac contains a selection of popular songs, with charming illustrations of fashionable ladies and gentlemen, and ‘fold outs’ for both Republican and Gregorian calendars for 1805 (see illustration at top of page).

Published by HMSO, Infantry section leading, 1934: a guide for non-commissioned officers commanding rifle and light automatic sections is a fairly basic handbook, of which thousands  were probably issued. However, there is a brief addition, written in pencil, in a section entitled ‘Wire’ which, with a date is between the two World Wars, strikes a chilling note…

‘Decontamination from mustard gas
1.    By hosing with water. By paraffin or petrol. By mopping up with rags, sawdust etc or by evaporation if time no obj.
2.    By boiling in water 1/2 hr (can be done to cotton clothing) 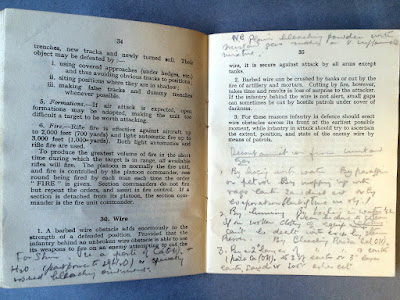 Our final selection was published in Halifax in 1853, the essential Every man his own farrier: containing the mode of treatment and cure of the various diseases incident to that noble animal the horse. with an appendix … to which is added a variety of useful receipts / by an old farrier. The majority of chapters in the book are indeed relating to the care and maintenance of horses: ‘On shoeing’, ‘The Windy or Flatulent Colic’ or ‘Grease, Crown-Scab and Rat Tail’. However, the last section – the ‘useful receipts’ – is a truly curious mixture, which begins with the memorable sentence ‘It may be useful to know the value of burnt rhubarb in diarrhoea…’ It goes on to provide recipes for blackberry wine and preparing a ham, advice on sheep husbandry, shoe blacking, avoiding nightmares, how to escape the effects of lightning and how to ‘extinguish female’s clothes when on fire’. Invaluable stuff. 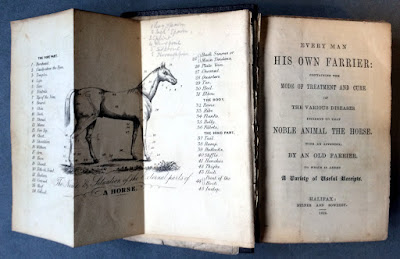