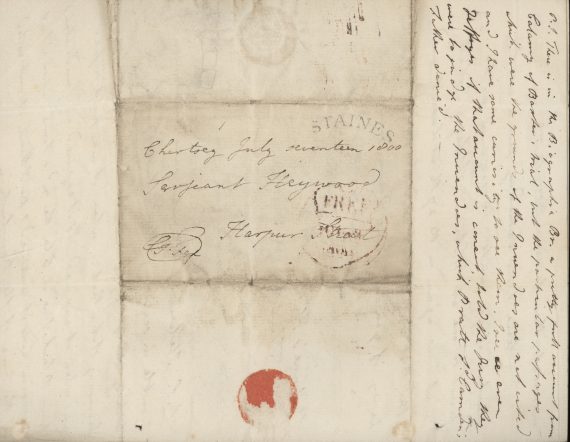 The Heywood family have recently made a very generous gift of family documents to the library.  One of items in this collection is an album containing 33 items of correspondence received by members of the Heywood family between 1799 and 1890. The first part of the album contains 18 letters from the MP Charles James Fox to Samuel Heywood (1753 – 1828) which gave us a brief but tantalising glimpse into Whig personalities.

Samuel was the eldest son of Phoebe and Benjamin Heywood, the Manchester merchant and banker. He was a dissenter and vocal critic of intolerance in the civic sphere and of the Test and Corporation Acts which were designed to prevent religious dissenters like himself from holding public office. He wrote a history of the Test and Corporation Acts, The Right of Protestant Dissenters to a Compleat Toleration Asserted (1787), under the pseudonym A. Layman in which he severely criticised the exclusiveness of the Anglican hierarchy.  In spite of this he was appointed as a serjeant-at-law, a judge, in 1794.  Heywood was also active in radical and Whig politics and developed a friendship with Charles James Fox (1749 – 1806) the Whig MP. Fox was a colourful figure who was a thorn in the side of William Pitt the Younger. He was a leading campaigner for the abolition of slavery, a prominent advocate of religious tolerance and individual liberty, and a supporter of the patriots in the American War of Independence.

The correspondence from Fox to Heywood illustrates the friendship between the two men as they make arrangements to meet and discuss plants. Undated invitation from Fox to Heywood Letter from Fox to Heywood about plants they have exchanged 17.01.1800

Fox spent much of his life writing his History of the Early Part of the Reign of James II, which the library also holds.  Fox researched and wrote the book in fits and starts and it remained unfinished when he died. The earlier section which he had written, but not finished editing, was published posthumously in 1808. Heywood’s  contribution of material to this work is referenced in the letters, where Fox notes that he has neglected his history of James 11, but is now hard at work, thanks Heywood for information supplied, asks his opinion on the veracity of sources, tests out his interpretations of events and requests documents on particular themes. Tags: Charles James FoxHistory of the Early Part of the Reign of James 11Samuel Heywood