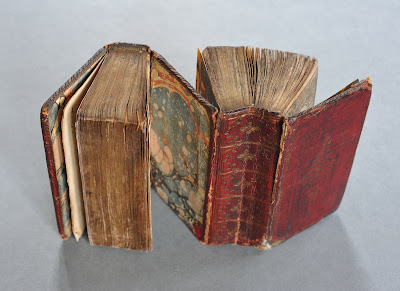 These two illustrations are examples of the ingenious ways in which books have often been bound.

The first is often known as a dos-à-dos binding (from the French meaning ‘back-to-back’) but is more properly termed tête-bêche (from the French meaning ‘head-to-toe’). Here two separate books, a 1633 New Testament and a 1629 Book of Common Prayer, have been bound together with the text of one text rotated 180° relative to the other, so that one text runs head-to-tail, the other runs tail-to-head. Technically this volume doesn’t have a back cover but rather has two front covers. When a reader reaches the end of the text of one book, the next page is the last (upside down) page of the other. The two works have been bound in red morocco. Both boards have a gilt floral stem border and a gilt floral centrepiece stamp, with all edges gilt. 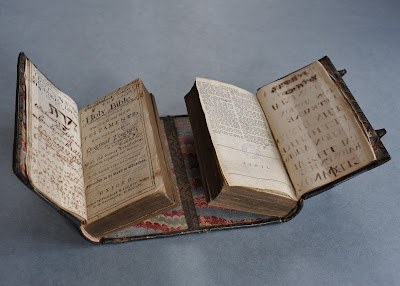 The second example consists of a single work, a Bible of 1756, which has been separated into two equal parts part way through the Book of Psalms. These have then been bound side by side, so that the second part opens back-to-front. The effect is of two separate books, bound fore-edge to fore-edge, on a common lower board, with separate spines. The front cover opens in two halves from the centre, rather like a cupboard. The left-hand label reads: ‘Oracula sacra William Freemantle’s 1765’. The right-hand label reads ‘Si quis loquitur, loquatur ut eloquia dei I. Peter. 4. II.’ The join on the upper board(s) is fastened by two metal clasps, with heart-shaped clasps and catches. The binding is 18th-century English black goat, with a red morocco label in the centre of each half of the upper board, lettered lengthwise in gold. 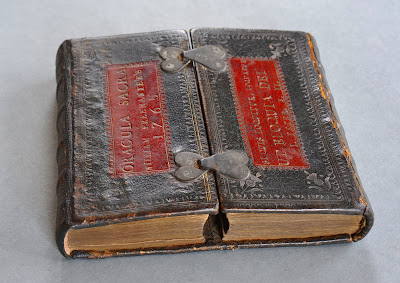