Thanks and Farewell. Jack Harris

As summer draws to a close, we find ourselves bidding farewell to another of our invaluable university work-placement students. Jack spent almost three months here at the Library working on our Belle Vue Project, cataloguing an amazing number of Belle Vue images. Before leaving he also created our first Virtual Belle Vue exhibition on Belle Vue’s famous fireworks extravaganzas. We are sorry to see him go, but wish him all the best in his final year. Here is Jack’s report on his summer in Belle Vue Gardens: 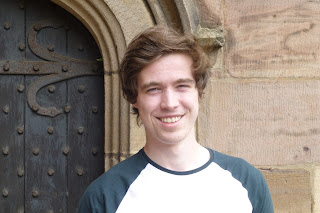 Despite having grown up just a short train journey away from the center of Manchester, it was only quite recently that I had the good fortune of coming across Chetham’s Library. As a History student with the Summer months on the near horizon, the idea of volunteering at the library and learning more about how history can be put into practice soon became compelling.

From my first day at the library I found plenty to absorb and plenty to contribute. Perhaps naively, I had always thought of Manchester as a city that was born in the factories and the mills of the Industrial Revolution, thinking little of the settlements that preceded this era. It thus came as a surprise as I walked through the echoing passages of the library to learn that parts of the building dated back to the 15th century. To spend time in such a library with such distant origins was an experience in itself.

My work revolved around the library’s extensive collection regarding the Belle Vue Zoological Gardens. While the name certainly rang a bell, I was admittedly quite unfamiliar with the pleasure garden. However, given a Summer of cataloguing and digitising the various forms of fascinating ephemera, I was able to develop an appreciation for the role Belle Vue had played in the lives of Mancunians across a number of generations.

Besides cataloguing and digitising, I was also able to produce a virtual exhibition on a specific attraction that was offered by Belle Vue over 100 years or so: the Pyrodrama. Belle Vue’s pyrodramas re-enacted historic clashes of civilisations from the age of imperialism, featuring fireworks, pyrotechnics, cannons, evolving scenery and hundreds of actors. To work on such a project was especially rewarding, as it allowed me to gain a deeper understanding of a feature I found particularly interesting. It also allowed me to use and develop the researching skills I have acquired as a History student as I delved into the primary and secondary sources Chetham’s had to offer.

For myself, my Chetham’s volunteering experience has been a success. I have made what feels like a meaningful contribution to the digitisation and preservation of an important chapter in Manchester’s history. I have furthered my understanding of what characterised Manchester in previous generations. In addition, I have gained an insight into the role history, libraries and archives play in the public sphere, and what a ‘History oriented’ career could potentially look like. With graduation less than a year away, such experience is invaluable.
I’d finally like to thank the staff at Chetham’s for the opportunity and for supporting my efforts over the Summer. I’d thoroughly recommend volunteering to students in a similar position to myself.