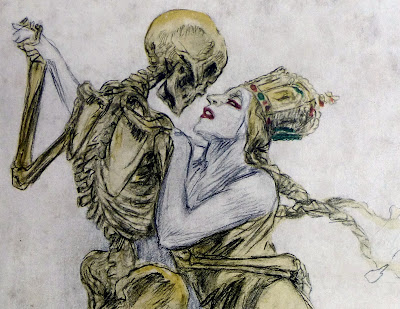 Whilst looking for something else (the usual story), we came across this striking image by the Dutch cartoonist Louis Raemaekers (1869-1956). During World War One, Raemaekers produced a series of fiercely anti-German political cartoons which were picked up for distribution by the British government in a series of propaganda pamphlets.

The Germans attempted to have Raemaekers arrested (the Netherlands were neutral during the War), and the Kaiser put a bounty on his head. In the face of a series of threats, Raemaekers relocated to England where his cartoons were syndicated across the world.

The German Tango (‘From East to West and West to East I Dance with Thee’), depicts a young woman with braided hair wearing the Imperial Crown of Germany dancing with a skeleton. The idea is that in a fit of racial pride, death has been welcomed as an ally. Once begun, there is no stopping the dance, which goes on for ever across the world. 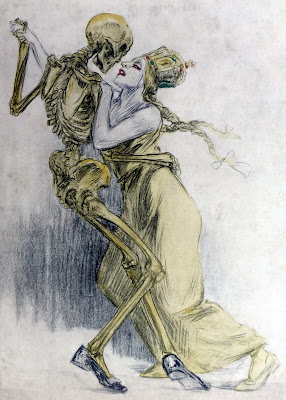