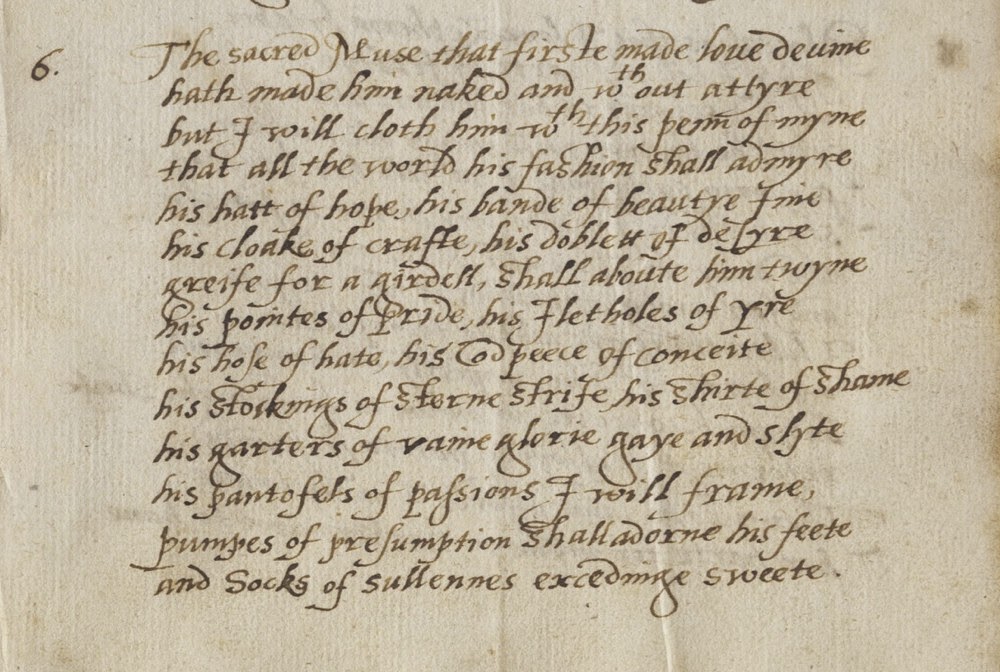 Today’s post is guest-written by Dr Joel Swann, who completed his collaborative doctorate here at Chetham’s Library in 2012, working on the Farmer-Chetham manuscript which contains a copy of Sir John Davies’ Gullinge Sonnets. Joel is now Assistant Professor in the Department of English at Hang Seng Management College, Hong Kong.

For her ‘Poem of the Week’ in the Guardian last week, Carol Rumens made the excellent choice of one of the satirical Gullinge Sonnets by John Davies, probably written around 1594. What Rumens doesn’t mention is that Chetham’s Library had an important role in the history of those sonnets – a role this blog post aims briefly to account for.

By and large, renaissance English sonnets are known from printed books: scholars record that as many as 40 extensive collections of sonnets survive from the period 1560 to 1634, with most of those appearing around the 1590s,1 the decade in which Davies wrote his. But as far as we know, the Gullinge Sonnets were never printed during their author’s lifetime, and in fact, were virtually unknown to readers of Davies until the 1870s. At that time, they were discovered in a single manuscript at Chetham’s, where it had been kept since the 1820s (it’s now tucked away in the Muniment Room at MS A.4.15). The manuscript that includes the sonnets is most usefully described as a ‘miscellany’, a collection of poems and prose put together informally over some years by amateur compilers, most likely in the late sixteenth and early seventeenth centuries. Alexander Grosart published a transcription in 1873, and paid homage to its current and previous owner with the affectionate title Dr Farmer-Chetham Manuscript – Farmer being the Cambridge scholar and book collector, Richard Farmer (1735-1797). 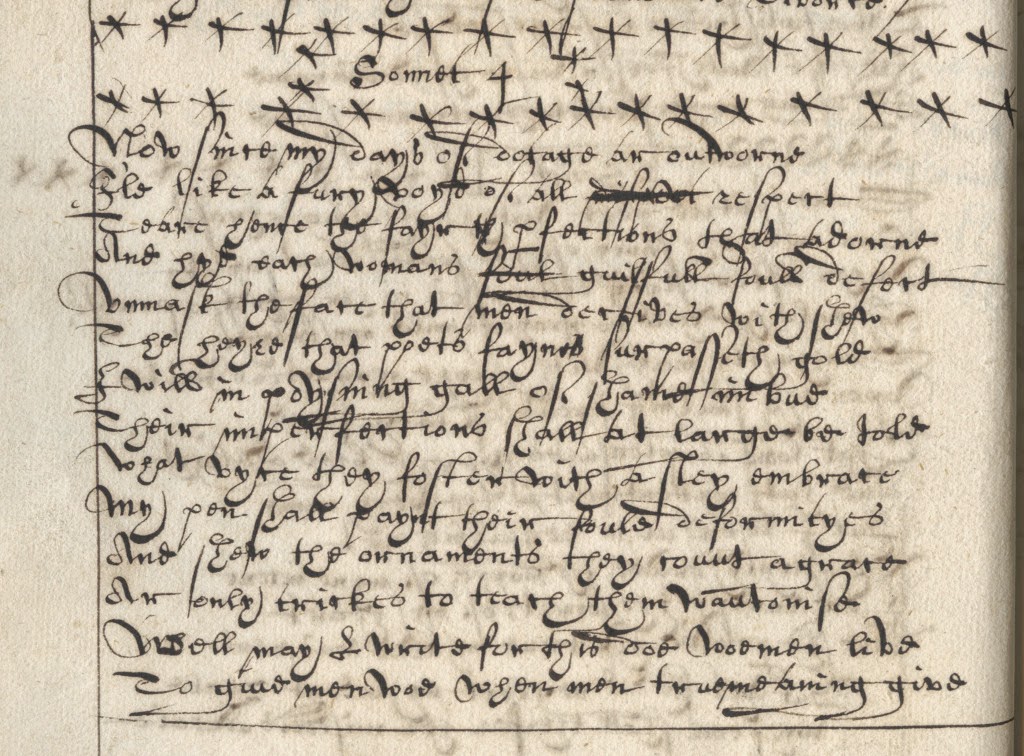 If it were not for Chetham’s care for the manuscript over successive generations of librarians, then, we might not know these poems at all. But the survival of the Gullinge Sonnets in this rare and unusual form can tell us more about the way people produced and read poetry in early modern England, four hundred years ago. To begin with, we must remember that print was not the only medium in which people could read new poetry at that time. It was very common for popular poems to be copied by interested readers, by hand, over and over again, thereby reaching a lot of people without going near the printing press. So, even though only one copy of the Gullinge Sonnets is known to survive today there is every possibility that they enjoyed a much wider readership beyond this one book. It’s worth mentioning that the copy of the sonnets at Chetham’s is not in John Davies’ hand – so already, the poems had travelled some distance from their author. Furthermore, MS A.4.15 is likely to have been compiled by people with connections both to London and Norfolk, enabling further copies to be made in either of those locations. Sadly, without any further supporting evidence, we will never be sure how many people were able to enjoy Davies’ sonnets. But they could very well have been read quite widely.

That said, it is rare to find any sonnet sequences with a demonstrably wide readership in this period. Many examples survive – another manuscript at Chetham’s Library includes a series of six sonnets;2 Ralph Stawell copied ten into a manuscript of legal notes;3 King James VI/I himself wrote nine, which are found in two copies (a miscellany and a collection of poems by the monarch).4 Unlike those printed sonnet sequences which included dozens of poems, these short collections would have been relatively straightforward to copy out. With many unique or near-unique examples of this kind existing, perhaps it was common for short sonnet sequences to circulate only amongst limited circles. After all, readers enthusiastic for sonnets did not need to ask their friends and contacts for further examples – if they had the money to do so, the books were available for the buying.

What we know about sonnets in manuscripts is, at the moment, very limited, and it is entirely forgivable that a newspaper article would neglect to mention the history behind the texts it presents. In the same spirit I hope that we can all continue to enjoy the Gullinge Sonnets on their own merits, but this little foray into the topic surely gives us something more to think about the literary culture of a particular time and place. In England in the 1590s, readers had options about how to read their sonnets. They could purchase an extensive printed volume generally available to a book-buying audience; or alternatively, they could seek out or accept copies of smaller sequences in a miscellany collection. As such, writing sonnets was the domain of ‘professionals’ – or at least, people seeking financial remuneration – insofar as they were supported and endorsed by a substantial and heterogeneous layer of amateur enthusiasm, coming from multiple levels of class, ranging from student to lawyer to monarch.

1. For these figures see Thomas P. Roche, Jr, Petrarch and the English Sonnet Sequence(New York: AMS Press, 1989), p. xvii and Michael Spiller, The Development of the Sonnet: An Introduction, pp. 198-199.
2. MS A.4.16, pp. 6-8.
3. Cambridge University Library MS Hh 3.8, discussed in Guillaume Coatalen, ‘Unpublished Elizabethan Sonnets in a Legal Manuscript from the Cambridge University Library,’ The Review of English Studies 54.217 (2003), 552-65.
4. London, British Library MS Add. MS 22601. Their only other witness is an authorial manuscript collection with autograph revisions from the late 1610s. See Maria Reardon, ‘The Manuscript Miscellany in Early Stuart England: A Study of British Library Manuscript Additional 22601 and Related Texts,’ Unpublished PhD thesis, University of London, 2007, in which the poems are discussed (vol.1 pp 186-187) and transcribed (vol. 2, pp. 43-51).