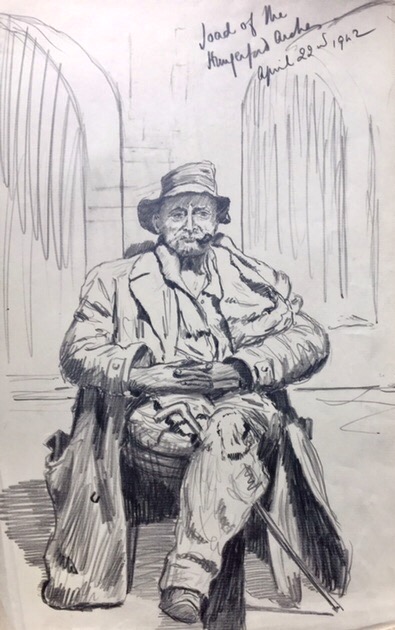 The pencil sketch of the philosopher C.E.M. Joad (1891-1953) is one of eight loose sketches contained in a folder, of which seven date from the Second World War. Only one item is signed:  a watercolour of Westmoreland Terrace following the bombing of 5 July 1944. This is signed Ronald Fuller and is dated 1945. Whether Ronald Fuller was the artist responsible for the other sketches is difficult to say. His name appears in the folder with an address of Lansdowne Road London, but we have not been able to find out anything about him and his work as an artist. The six pencil sketches include five portraits ranging in date from 29 January 1941 until 22 April 1942.  Two of the sketches, those of Mrs Jannie Warren and Mr Temple, refer to the Hungerford Club. This was an air-raid shelter for rough sleepers, those with mental health issues and alcholism, and others who were not made welcome in the main shelters, and was set up by Bernard Nicholls, a conscientious objector. Arches under Charing Cross Station were converted into a shelter with a capacity of 200, 3 tiered bunks, a canteen, a medical first-aid post, baths and lavatories. It was one of the most ‘exclusive’ clubs in London – you couldn’t get in without a special pass from the City of Westminster’s shelter service. Whether Cyril Joad was a member of the club is not clear but he must have used the same shelter, as his portrait refers to Hungerford Arches. Joad was influenced by the socialist ideas of G. D. H. Cole, H. G. Wells and George Bernard Shaw. He was a member of the Fabian Society and a supporter of women’s suffrage. He was a pacifist and on the outbreak of the First World War he joined the No-Conscription Fellowship (NCF), an organisation formed by Clifford Allen and Fenner Brockway that encouraged men to refuse war service. In the 1930s he took up a post at Birkbeck College and produced a number of best selling books on philosophy, Guide to Modern Thought (1933) and Guide to Philosophy (1936). Joad became Britain’s most popular philosopher, possibly just cause for Bertrand Russell to despise him. In January 1941 Joad became a member of the panel of the BBC radio programme The Brains Trust. The programme was very popular and Joad became a well-known public figure. His favourite expression, ‘It depends what you mean by…’ became a popular catch-phrase. The sketch is of Joad at the height of his popularity. On 12th April 1948, he was convicted of ‘unlawfully travelling on the railway without having previously paid his fare and with intent to avoid payment’. He was fined £2 but as a result of the conviction he was sacked from The Brains Trust, and    told that he had lost all chance of gaining a peerage. He died, a somewhat embittered figure, five years later.