The Revolution will not be Televised 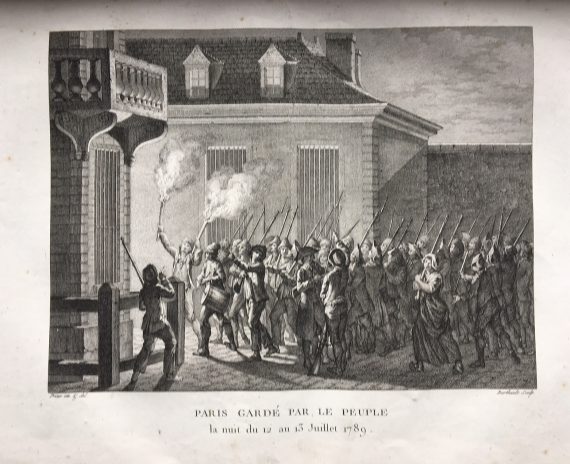 And indeed it wasn’t – not the French one, at least. It was engraved, however, a more genteel if slower way to record change, here presented as a Bastille day special from the Library’s wide-ranging and eclectic collection of prints. Our Librarian writes:

The Tableaux historiques de la Révolution française is one of the most significant artistic achievements of the revolutionary period. The Tableaux consisted of a numbered series of engravings illustrating dramatic moments from the Revolution, each accompanied by a four-page written narrative. The night before the morning after – Paris guarded by the People The previous day, 13 July, looting begins – or expropriation, if you prefer

The Library has twenty-five engravings from the series, minus the accompanying text, but the Tableaux, as a whole, consists of 145 engravings published in different editions between 1791 and 1817. The prints are of an exceptional artistic standard and were luxurious objects, but even so there was high demand for them and the Tableaux were hugely successful. The artist Jean-Baptiste Prieur was responsible for the first 48 tableaux, and claimed to have been an eye-witness and a participant in some of the events he depicted. At first glance the engravings appear to be visually accurate, topographically precise depictions of particular events, but they are artistic compositions and many of the scenes were manipulated to improve the impact of the visual drama and also to express specific ideas about the nature of the event. The Revolution buries its first dead after the Storming By 9 August, sterner means were sought to express criticism of the Ancien Regime – Chantilly’s cannon are informally nationalised