The uncertain glory of an April day… 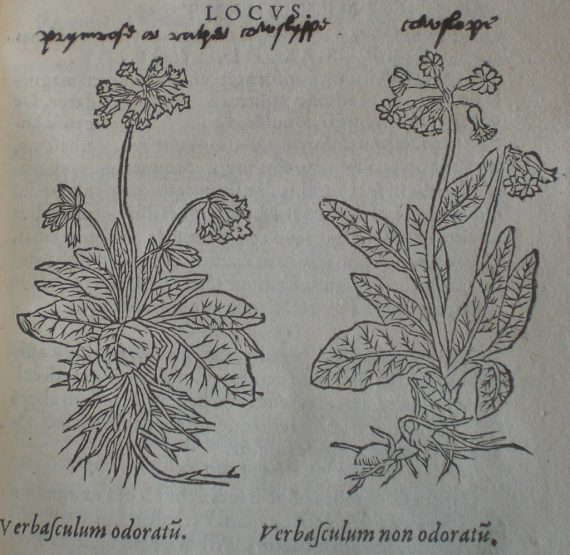 In between struggling with the uncertain glories of wind, rain, hail and snow over the last few weeks, we’ve been enjoying spring flowers, both in our gardens and in some of the books in the library’s collections. Our selections come from works published in the sixteenth, eighteenth and twentieth centuries and both text and images reflect the very different audiences for which each was designed. From our 1551 edition of Leonhard Fuchs herbal, ‘De historia stirpium…’, come two charming little black and white woodcuts of cowslips, with handwritten notes (added by a seventeen century owner) giving their English names – ‘prymrose or vulgar cowslyppe’. Fuchs work was intended to enable fellow physicians to identify, collect and use plants with medicinal properties. Fuchs considered the illustrations so important that he actually included in the book a portrait of the three artists involved, and in the large folio editions the intention was that the black and white outlines would be accurately hand coloured to further assist with identification. Our copy is one of an edition designed to be compact and pocket sized, so that they could be used on field trips. Our next cowslip is a simple, but delicate, hand coloured flower from the multi volume set ‘English Botany..’ published in 36 volumes between 1790 and 1814 by the botanist James Edward Smith, who wrote the text, and James Sowerby, who provided the illustrations. This work was aimed at the new wave of serious naturalists, botanists and collectors and combined accurate, scientific information with elegance of text and image. Compared with Fuchs and Sowerby, the cowslip drawn by Robin Tanner, from the King Penguin volume ‘Flowers of the meadow’ published in 1950, seems a little pedestrian, although the text by Geoffrey Grigson is quite lyrical, including literary references, lines from poets and personal observations on the botany and ecology of meadows. To quote from our previous blog on the King Penguin series…Allan Lane described them as being designed ‘to appeal to the general liking for illustrated keepsakes on special projects’, in other words aimed at an intelligent, but broad, general readership. However, we also have a limited edition copy of ‘Robin Tanner: the etchings’ which includes images of spring flowers which Robin made for ‘Woodland plants’ written by his wife, Heather. These black and white etchings of fritillaries, daffodils and violets, have far more life and texture than those for ‘Flowers of the meadow’ and it seems obvious that they were intended for an appreciative group of art lovers and book collectors. Finally, Sowerby’s ‘viola odorata’ described by Smith as ‘The favourite violet, so justly esteemed for its delightful fragrance, is, like many other most desirable plants, frequently found wild and easily cultivated in the garden. It requires only a moderate degree of shade and moisture, and commonly flowers in March or April. A white flowered variety sometimes occurs, and a double one is preferred by florists, not merely  because it is unnatural but on account of its richer scent’.

Title from William Shakespeare’s The Two gentlemen of Verona

Grigson, Geoffrey
Flowers of the meadow, 1950