For the last month, performing arts company iOrganic have been creating an ‘unofficial’ tour of the Library and medieval buildings, engaging with visitors to gather stories, real or imagined, about the history of the place. Last Saturday they hosted an open workshop to further identify historical myths, half-truths and unlikely realities from the past, in preparation for their one off performance on Thursday 18 February. 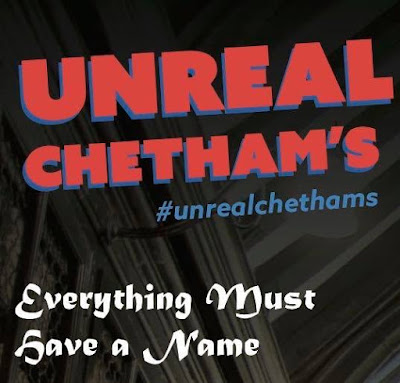 We really enjoyed our workshop on Saturday, and ended up with some interesting stories written by everyone and some fake artefacts and forgeries we’re looking forward to using in our performance. The group was a fairly small, intimate bunch which ended up being quite nice in that it we could give equal attention to everybody.

The workshop started at 1:30 with a quick tour of the Library, taking everybody up into the Reading Room to look at a selection of our favourite documents and books including William Henry Ireland’s Shakespeare forgeries. We told our workshop participants a bit about the Reading Room – about Marx and Engels’ table, and about the chicken in the wall carving, to encourage inquisitive thinking about artefacts, history, and truth. 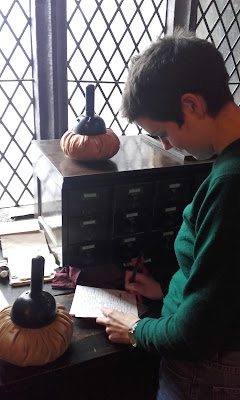 Then we returned to the Audit Room for everyone to get paper and pens, and gave everyone the first exercise – to select an item either in the Audit Room or one they had spotted elsewhere in the library, and to come up with answers for the following questions: “What is it for? Who made it? When? Who owned it 100 years later?” Harry and I both took part in every exercise as well, to foster a friendly, relaxed atmosphere.

We took a break after 10 minutes of writing to hear what everyone had written. We had varied, imaginative answers about a variety of objects in the library, from mysterious little ornaments to the imposing grandfather clock in the Reading Room.

After this, we asked everyone to go more in depth into one of their answers, fleshing out their story a bit. We went around the room sharing what we had all written again, and then moved onto the last writing exercise – to come up with a written piece of evidence for the story or to begin to decide what kind of document might support it. 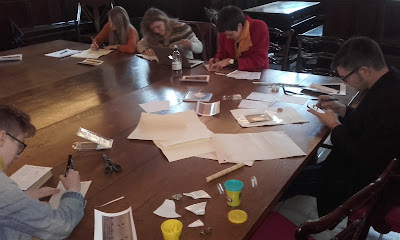 The last half hour of the workshop was spent making this piece of evidence into an artefact or document. We supplied papyrus paper; rough yellowy “antique” paper; gold pens to mimic gold leaf detailing; black ink pens; ribbon; play dough to make seals; two old books to insert pages into; and for inspiration, some photographs of manuscripts in Chetham’s collection, and a couple of fossils and semi precious stones. Participants made a variety of different kinds of documents.   People seemed to appreciate the chance to play and use their imaginations. We had a nice piece of feedback which was that we made it accessible to people who don’t write creatively much, making it an easy-going workshop in which we didn’t do too much writing jargon. One of our participants, who said he didn’t write creatively but was looking to get into it, told us afterwards that he’d enjoyed the afternoon and was keen to book a ticket for the Unreal Tour, which we were very happy about!

‘The Unreal Tour’ will light-heartedly question the faith we put in experts’ opinions and ‘official’ history when we think about the past.

Tickets are free and available from here.
Tickets are limited so please book ahead.