The wondrous transformation of caterpillars and their remarkable diet of flowers 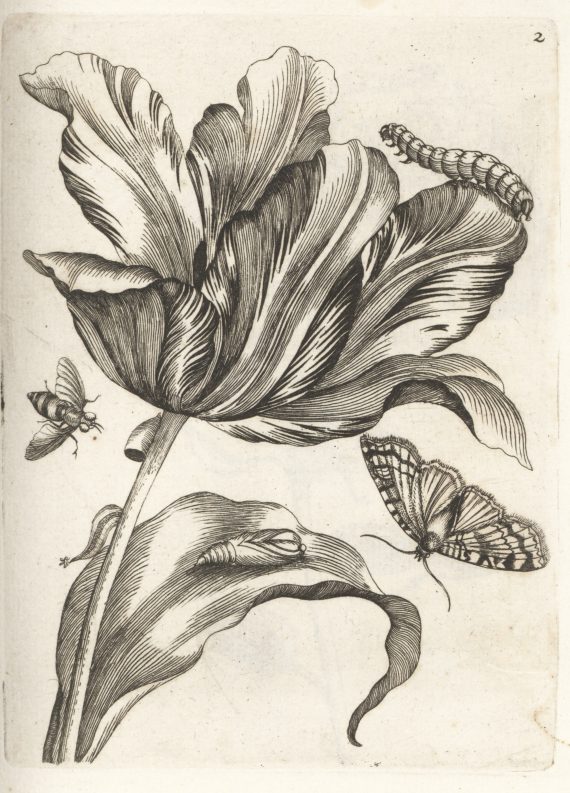 ‘In my youth, I spent my time investigating insects.’

Maria Sybilla Merian (1647 – 1717) died 300 years ago this month. This remarkable woman, who was born into a 17th century society in which few women were educated or able to live independently, became one of the world’s first ecologists. As a naturalist, entomologist and scientific illustrator she embraced both science and art, and her groundbreaking studies of insect metamorphosis transformed the field of entomology and raised the standards of natural science illustration. Born in Germany in 1647, Maria was a curious child who was totally fascinated by caterpillars and their transformation into butterflies and moths. She started to breed them and track their life cycles when she was young. As her artistic family nurtured her artistic talents, teaching her painting, drawing and copper etching, she began to illustrate the different stages of their development and the plants they lived on. Merian was an independent spirit. Not only was she successful in a male dominated scientific world, her observations contradicted prevailing beliefs. She was the first person to recognise and illustrate the process of metamorphosis. This was a huge  advance in knowledge in an age when many naturalists still believed in ‘spontaneous generation,’ the notion that living organisms develop from inanimate matter. In this world view insects were ‘born’ from mud and caterpillars from cabbages. Merian became a teen bride at 16 and gave birth to two daughters. This didn’t get in the way of her caterpillar studies and she published her first ‘Caterpillar book,’ Der Raupen Wunderbarer Verwandlung and sonderbare Blumen (The wondrous transformation of caterpillars and their remarkable diet of flowers) in 1679. A second volume followed in 1679 and she completed a third shortly before her death in 1717. These works depict the different stages in the life cycle of European caterpillars in a series of intricate copper plates.

The library has a wonderful edition of Erucarum Ortus Alimentum et Paradoxa Metamorphosis, the Latin translation of the ‘Caterpillar books’ which were originally published in Dutch. Marien’s daughter and collaborator, Dorothea, published these works posthumously in one volume. It is set out in three parts, each containing around 50 plates of caterpillars, butterflies, notes and other insects with their plants and descriptions.  It was printed by Johannes Oosterwijk, an Amsterdam publisher who bought all the plates and texts of Merian’s works from Dorothea. Merian’s works are unique. Whilst other natural scientists of the time were busy classifying the natural world into narrow categories, she developed a personal style that celebrated the connections in natural processes. Her detailed illustrations, which Merian engraved herself on copper plates, depict the different stages in the life cycle of moths, butterflies and insects and their host plants on a single plate.

Merian led an independent personal life. She left her unhappy marriage in 1685 and moved to a religious community with her mother and daughters. She stayed for a few years then moved to Amsterdam in 1691 where she continued to study and work. The mileu of the ‘Dutch Golden age,’ where science, art and commerce were among the most advanced in the world, publishing was flourishing and women were able to earn money independently, liberated her to make a living from her entomological art. The illustrations in our volume are black and white but Merian also coloured her engravings to order as books at that time were usually printed on loose leaf pages so that buyers could choose the binding and colour. At the age of 52 Merian became the first woman to undertake an extended scientific expedition. She travelled to the rainforests of Surinam with her youngest daughter Dorothea to study the insects that entranced her in their natural habitat. Health problems forced her to leave after two years but by then she had collected sufficient material to produce Metamorphosis insectorum Surinamensium (1705). This splendid folio edition of copperplate engravings of rainforest creatures is her most renowned work.

Merian died in 1717. Sadly, her work was dismissed by nineteenth century scientists and then largely forgotten. Although few people today know of this remarkable, bold woman who changed botanical knowledge, there has been some revival of interest in recent years. The Maria Sibylla Merian society aims to educate the public about and encourage research related to her life and work http://www.themariasibyllameriansociety.humanities.uva.nl. A biography, Chrysalis: Maria Sibylla Merian and the Secrets of Metamorphosis, Todd, was published in 2007, and a new facsimile of Metamorphosis insectorum Surinamensium (1705) was produced by  Lannoo Publishers and Koninklijke Bibliotheek in collaboration with the University of Amsterdam in 2016. http://www.sibyllamerian.com/home.html. Of course we can still see the wonderful originals in Chethams and other libraries.