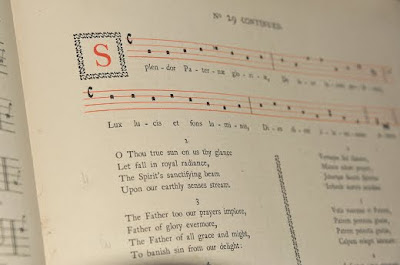 We are delighted to announce that we have recently acquired a copy of the Yattendon Hymnal, one of the most significant contributions to English church music. This has been generously given as a permanent loan – along with some other works associated with the church in Yattendon, Oxfordshire – by the Rev Tony Lynn, Team Vicar in Yattendon. 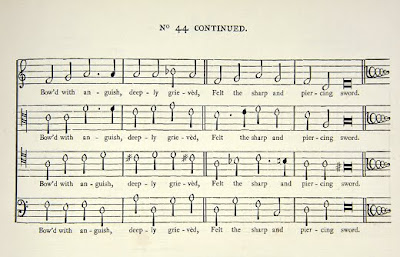 Hymns: The Yattendon Hymnal was compiled by the poet and scholar Robert Bridges (1844-1930) who later became Poet Laureate. Bridges was associated with many notable musicians and music scholars including John Stainer, Charles Villers Stanford, Hubert Parry, Frank Bridge and Gustav Holst. The hymnal, which was brought out in part form before being published as a single volume in 1899, was elegantly produced using red as well as black stave-lines, a distinctive typeface in an archaic style introduced by Bishop John Fell, and musical notation by Peter Walpergen. The high quality of the publication set the Yattendon Hymnal apart from the spate of other hymnals, including Hymns Ancient and Modern, that appeared in the late nineteenth century, but the book was expensive and not a financial success. It remains nonetheless one of the great English hymnals, a bridge between the Victorian hymnody of the last half of the 19th century and the modern hymnody of the early 20th century.