Theophila and a curious letter M 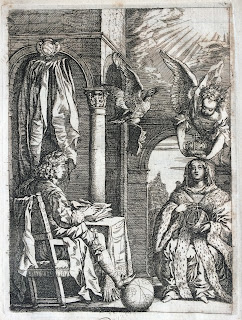 Edward Benlowes’ Theophila (1652), a 268-page poem in Latin and English, is a remarkable book for several reasons. It is said that no two copies of the Theophila are identical. Benlowes installed a rolling press, necessary for engraving and etchings, in his house in Brent Hall in Essex, and copies of the book were made up as individual presentation copies, varying in the order in which the prints appeared and in the number of illustrations in each copy.
Not only are no two copies of the book the same, no copy of Theophila survives in good condition. Benlowes’ insertion of plates, some of which were originally intended for other publications, and some simply too big for the volume, made the book unstable and the sewing and binding were invariably compromised. Our copy is typical. Benlowes’ gold tooled armorial stamp remains on the front and back covers but the leather on the spine has deteriorated and the sewing is starting to unravel. 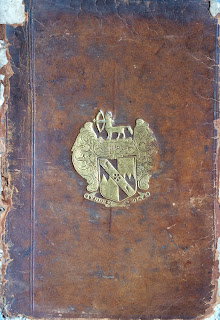 Also of some note, the book contains a striking series of etchings by Francis Barlow (1626?-1704), the first master of English book illustration. Barlow’s illustrations, the best of which trace the mystical progress of the soul, are in the tradition of the emblem book, but are both more complex and more naturalistic than typical emblematic imagery. They are among the greatest of interpretive book illustrations and like all good illustrations are exquisite in their design and also challenging and unsettling in their impact. The image of a woman representing winter was originally intended for Wenceslaus Hollar’s set ‘The Four Seasons’ of 1644 but she has an erotic charge and a seductive quality as well as a sense of foreboding and mystery that are ultimately disturbing. 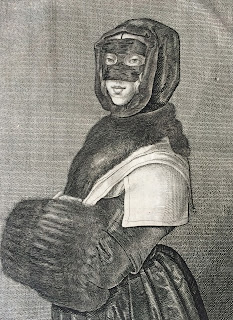 Barlow’s etchings are well known and copies of Theophila are not scarce but are valued for the prints and as a somewhat curious example of an antiquarian form of vanity publishing. The poem is borderline doggerel, a dreary confused work written in a stumbling rhyme scheme with probably more exclamation marks than any other poem in the English language. At one point however, it contains two pages of fourteen six-line verses each of which is headed by a human letter form woodcut. Some of these are charming, such as the man and child G, 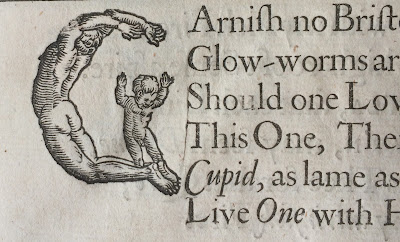 the embracing Adam and Eve making up the letter A, 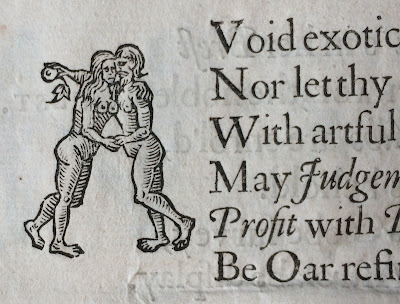 and the coy couple N.

The letter M however, leaves something to be desired.