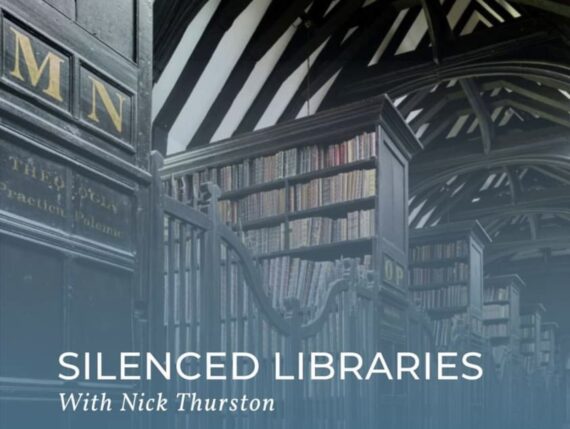 In our previous blog post, we mentioned our contribution to the Manchester City of Literature’s Festival of Libraries, a brand-new celebration of Greater Manchester’s 133 libraries. The festival was supported by Arts Council England and hosted a wide variety of digital content, and we’re all hoping that there will be a Libraries Festival next year too.  The contributions we made are staying online on YouTube, and now the Festival organisers have also uploaded videos of the ‘Inspired by Libraries’ talks. For our talk, we were delighted to have musician and broadcaster Guy Garvey back in the Library (albeit virtually), in conversation with our Library Committee Chair, Professor Hannah Barker. They had fun exploring what drew them to libraries, and what kept them coming back:

There’s also a tour of the Library led by writer and library fan Rosie Garland:

Our own Visitor Services Co-ordinator, Siân-Louise Mason, tells you how it looks from our end in ‘Meet the Librarian’:

Our collaborations with artists and academics brought our ballad collection to life through song, including a very topical piece on vaccinations from the 19th Century. We also shared the fascinating story of a local furniture maker who became an expert in forgery and deceit. In addition to the adventures of a time-travelling 11-year-old, narrated here by young local reader Bella. The eerie absence of readers enforced by the pandemic was explored by artist Nick Thurston. For those of you who missed the series of online events, you can still bring the magic of the UK’s oldest public library into your home via our YouTube channel.

Here’s our tale of forgery and deceit revolving around Peter Lindfield’s research on Gothic furniture:

Peter has published widely on Georgian Gothic architecture and design broadly conceived, as well as heraldry and the relevance of heraldic arts to post-medieval English intellectual, cultural, and aesthetic culture. During the Gothic Manchester Festival 2019, Peter co-organised an event at Chetham’s Library titled ‘Faking Gothic Furniture’. This involved discussing the mysterious George Shaw (1810-76), a local Uppermill lad who developed an early interest in medieval architecture and heraldry, going on to create forgeries of Tudor and Elizabethan furniture for a number of high-profile individuals and institutions at the time, including Chetham’s!

Jennifer Reid brings our ballad collection to life through speech and song:

Jenn, the ‘Langley Linnet’, is a performer of 19th century Industrial Revolution broadside ballads and Lancashire dialect work songs. She has performed at the Venice Biennale, in New York for the Creative Time Summit, in Croatia for the Museum of Contemporary Art, in Brussels, in Switzerland and regularly in London, and of course the North West. Jennifer’s work is preserved in the Doc Rowe Archive and at the British Library, and she sits on the executive committee of the Society for the Study of Labour History.

If time travel is more up your street, you can follow Chetham’s Library and local publisher Seven Arches Publishing to celebrate ‘Atlanta Tully, Time Traveller the third in the Time Traveller series aimed at readers in the 8-12-year-old age range:

And why not immerse yourself in the many minutes of silence that public libraries are organised around in a short presentation featuring a sample of rough cuts from an artwork-in-the-making shot at Chetham’s during that liminal time between lockdown and the slow reawakening of cultural spaces. This piece was created by artist, writer, and editor Nick Thurston: