Who’s been eating my book? 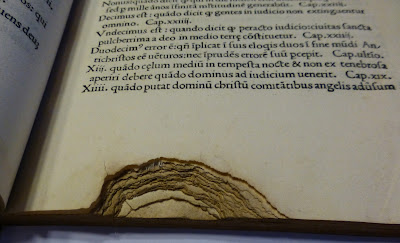 We recently had a book returned to us from the bookbinders with an unusual warning: over thirty leaves of our copy of Lactantius’s works, printed in Venice in 1478, had been eaten by a mouse or a small rat. The Library, thankfully, is not prone to infestation from either vermin or from insects. For one thing, it’s simply too cold for most creatures, with the exception of librarians and other hardy humans. But Chetham’s, like many other libraries, has numerous examples of damage caused to the books by micro-organisms, insect pests and vermin. It’s not hard to identify books with worm holes; fortunately it’s a more unusual matter to find books damaged by rodents.

In any old building mice and rats were a constant problem and Chetham’s is no exception, being situated only a few meters away from two of Manchester’s rivers, the Irk and the Irwell. In fact, two of the original medieval doors in the cloisters still have cat flaps, and some years ago we managed to find the bell and collar worn by one of the Library cats in the 1960s. Until relatively recently, the site was populated by a litter of feral cats who survived on whatever they could catch. The fact that they were large and capable of breeding indicated that the pickings were good.

Look closely at the bottom of the door to see where the medieval Library cats got in and out of the cloister: 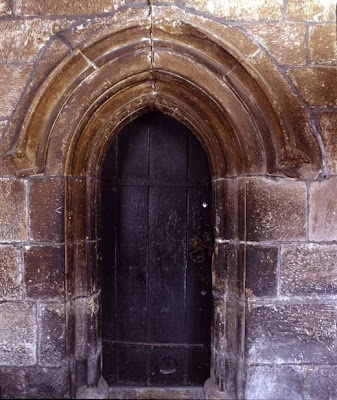 We are pleased to say that it’s likely that a mouse ate the copy of Lactantius sometime before we acquired it in the 19th century. Ever since it has been here it’s been on a high shelf at least a couple of meters off the ground, keeping it well out of the way of nibbling teeth.