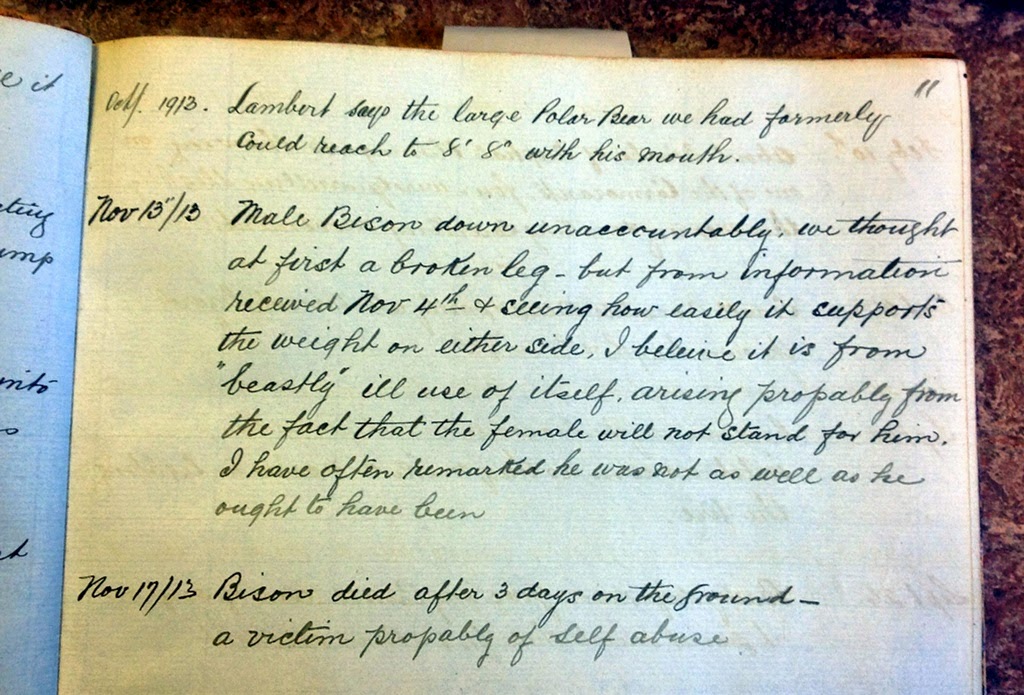 Among the items that we are getting ready for digitising as part of our Belle Vue project funded by the Esmée Fairbairn Collection Fund is a ledger containing reports on animals in the zoo in the early years of the twentieth century.
Written by George Jennison, the grandson of the founder, the book shows how the zoo’s curators faced an ongoing struggle to keep the animals healthy and alive in the face of Manchester’s smoky, cold and damp atmosphere. The book is full of fascinating detail – how much a rhino eats in a week (a half-grown specimen ate 19 stone of hay and 7 stone of bran), the sexual habits of polar bears and kangaroos (don’t ask), but is best for the accounts of things going wrong such as the time the monkeys escaped when a shell from one of the evening firework displays blew a hole in their cage. Six of the monkeys escaped but all were recaptured the following day, two apparently found walking around Longsight.
Whilst many of the animals died young, a problem with all animals in captivity, few were accorded a cause of death quite so unusual as the male bison who died in November 1913. The ledger entry is shown in the photograph and transcribed below. Look away now if you are of a delicate disposition:
Nov 15 1913: Male bison down unaccountably, we thought at first a broken leg – but from information received Nov 4th and seeing how easily it supports the weight on either side, I believe it is from ‘beastly’ ill use of itself, arising propably [sic] from the fact that the female will not stand for him. I have often remarked he was not as well as he ought to have been.
Nov 19 1913: Bison died after 3 days on the ground – a victim propably [sic] of self abuse.