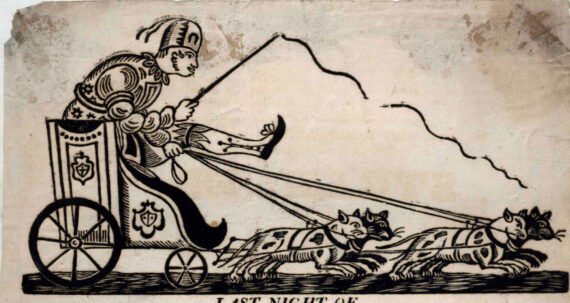 We are pleased to announce that we have added a new selection of digitised images to our online catalogue. These are from our ‘Cambrics’ scrapbook, which is one of the Library’s most important collections of broadsides, broadsheets, and single-sheet pamphlets concerning Manchester and its environs.

‘Cambrics’ is a rather curious name that simply describes the original fabric which covered the scrapbook. Within the book is a rich assortment of what the donor refers to as ‘handbills’ which cover topics as diverse as theatrical performances, a set of rules for the Coffee House, notices and reports of political and trade meetings, and a small collection of very early bills advertising local circus performances. Philip Astley (1742-1814) is usually credited with the invention of the first circus, and three of our circus bills advertise the performances of his ‘troop’. Find out more about him in our previous post here. One of the images we have uploaded is an advertisement for Mr. Astley’s display of horsemanship in March 1773.

The 254 broadsides in Cambrics range widely from light-hearted theatre posters and entertainment handbills to discussions of some of the most serious political issues facing England at the end of the eighteenth century. The earliest piece dates from 1739 and the latest 1848, over two-thirds of them, especially the more political broadsheets, come from the years 1789-1800, the turbulent decade of the French Revolution when Manchester’s populace was also stirred by the spirit of Republicanism. Our selection includes many of the most visually interesting and entertaining items. You can explore all of these on our catalouge. However, we have selected some of the rarest and most visually interesting for you to view below:

In this one day only display of horsemanship, ‘Mr. Astley and pupils will exhibit their various feats, in a manner quite new and surprising, in a field, opposite to Strangeways gardens, this afternoon, being Friday, exactly at three o’clock’. By next day the handbill would only be useful as scrap, which is why these items survive in such small numbers. 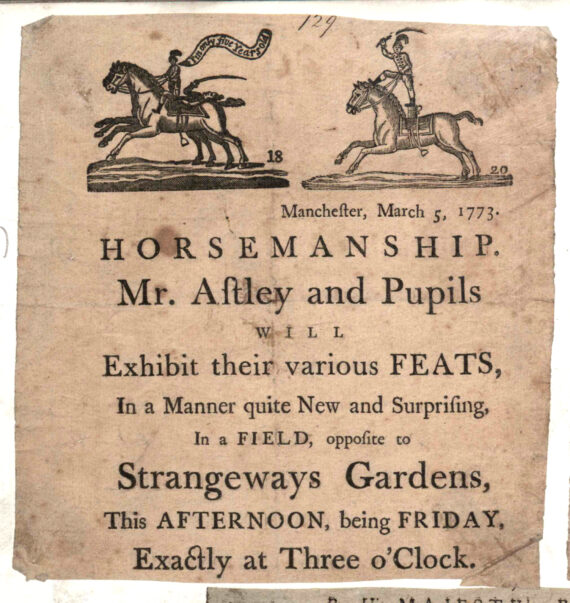 This playbill is decorated with the unusual image of a cat chariot (please don’t try this at home) and advertises the ‘Last night of Mr. St. Albin & Miss Aylet’s engagement at the Minor Theatre, Spring Gardens, on Monday, Aug. 16th, for the benefit of Mr. St. Albin’. PETA might not have approved. 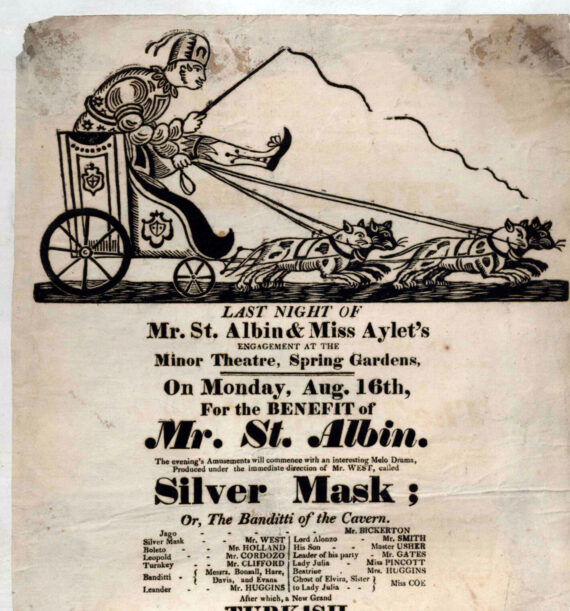 This one is one of our more well-known broadsides featuring the learned pig. ‘This present Wednesday evening, December 26, 1787. Upwards of one hundred feats of activity, by Astley’s troop, from London. To which will be added, the uncommon performances of the learned pig, and musical dog,’ 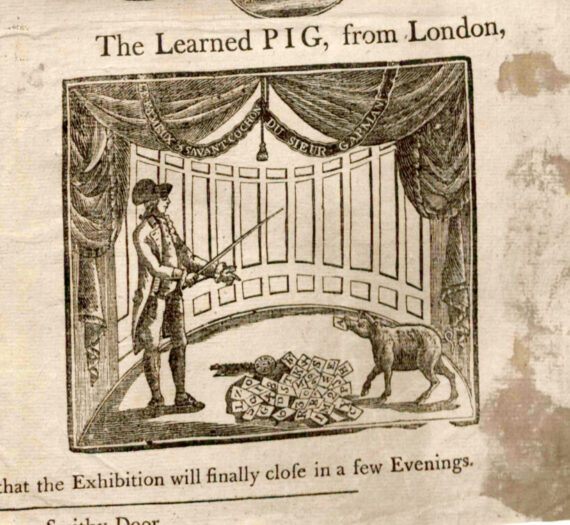 The Learned Pig from London.

A good way to spend the afternoon in 18th century Manchester would be to visit a display of ‘ Miniature models, in coloured wax: Mr. Percy’s collection, which he has been fourteen years in completing, may now be viewed at the house lately occupied by Mr. Barford Bushell, Riding’s-Court, St. Mary’s-gate, Manchester’. 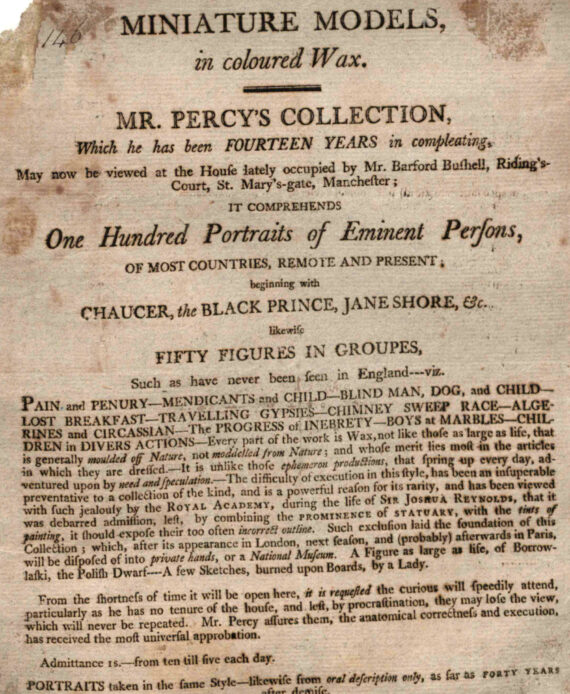 Four further examples of the delights – and perhaps the dangers – of a Mancunian night out in the Georgian age: 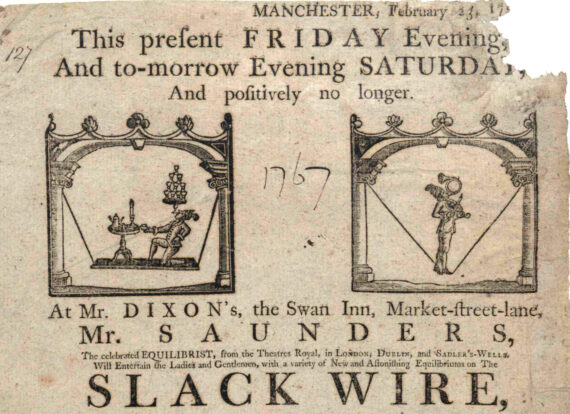 Slackwire acts of February 1767 – but hurry, only today and tomorrow! 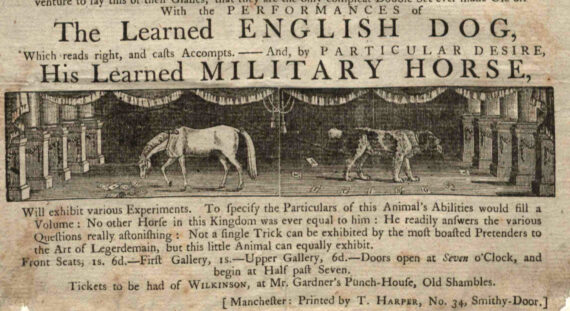 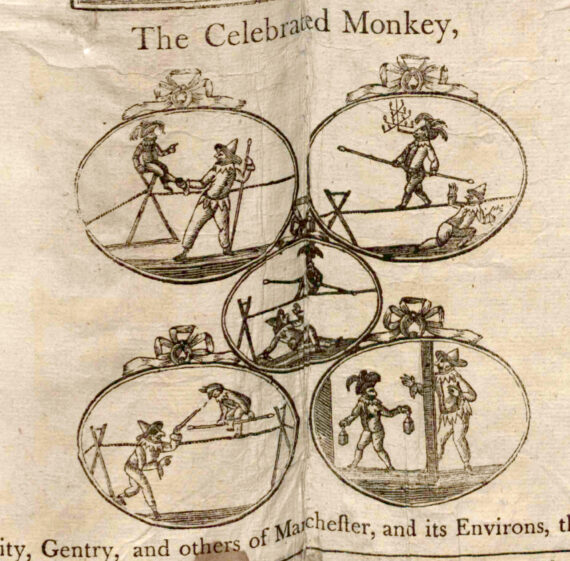 Are we grateful or sorry not to have lived in the age of the Celebrated Monkey? 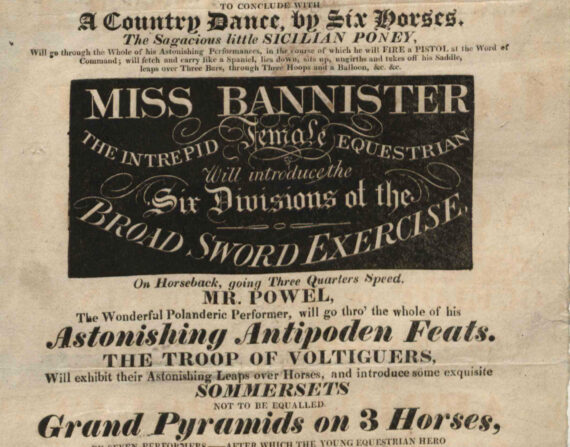 Miss Bannister terrifies with the broadsword, while the Sagacious little Sicilian Pony fires a pistol – an insurer’s nightmare? 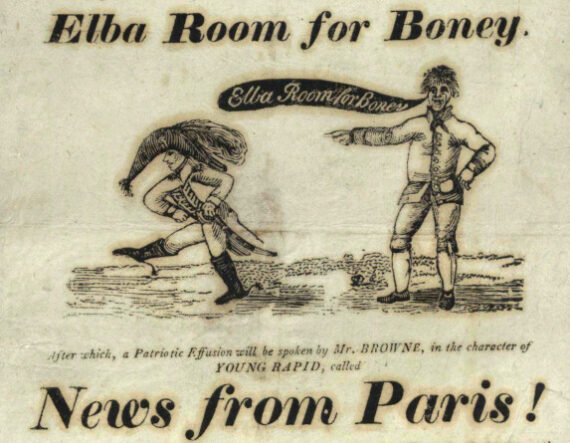 To explore the Library’s collections, please search our catalogues or browse the website and blog.