Inviting the world to our table: Cooking a programme of outreach activities with “The Ballad of Chetham’s Library” 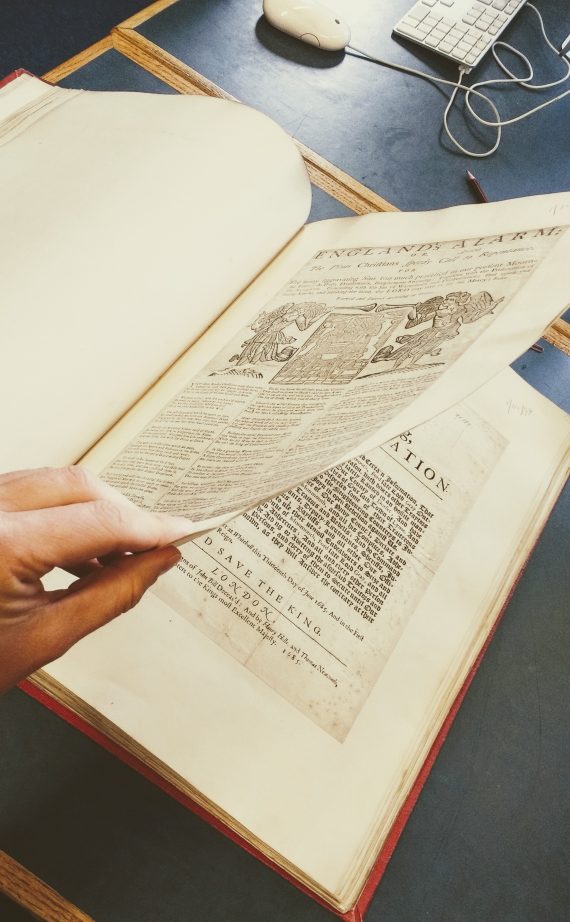 For the past few years, digitisation has become a “hot” word in the development plans of museums, libraries and archives. The process entails the creation of high-resolution digital surrogates of collection items that can be then accessed from anywhere with an internet connection and at any time of the day (or night, should one had the urge to do so!). On top of providing broader and easier access to collections, there are many clear benefits linked to the digitisation process: relieving handling pressure on fragile originals; allowing researches to establish new comparisons/distinctions between items; reuniting collections that might have become separated, and in many cases, providing better readability to documents that are hard on the eye. Once digital copies are created, they can also be used to accompany marketing material; showcasing treasures from the collection on social media and blog entries, and as inspiration for retail ideas. It is a process that institutions, both big and small, are expected to offer, and a MUST if they really want to reinforce the value of their collection. Indeed, digitisation can be a problematic, costly and lengthy process which requires a significant investment on the part of the hosting institution (not to mention all the work needed in digital preservation once the copies are up and running in the ethereal world of the World Wide Web). The general response from the public seems to be “If they have bothered to go through all this trouble, it really must be worth it!”, although then it would follow that the other collections, those patiently waiting their turn to be digitised, are part of some sort of hierarchical order within collections, which is in itself a very debatable assumption.

There is also another side to this coin. Once the collection has been beautifully digitised…then what? How do you make the world aware of this wonderful gift that is now available for everyone to share, enjoy and make use of? Well, this is when outreach programmes come into place.

Now that we have reached the equinox of our latest digitisation project “The Ballad of Chetham’s Library”, we thought it would be a nice time to stop and share what we have managed to achieved so far in terms of outreach and audience engagement. From the start, we have wanted to offer an outreach programme as varied as possible. Luckily for us, the examples of street literature included in our collections (which ranges from 16th to 19th century broadsides, ballads, songs, proclamations, musical scores, trade cards and other examples of single sheet material and ephemera – more details here) offer the best ingredients to “cook up” the most scrumptious looking dishes. We have wanted to invite amateur and professional folk musicians, artists, academics, researches, students, private collectors and collecting institutions, families, community groups and all the other unknown guests that come to our table very much invited though somewhat unseen, thanks to the magic of social media. Below is a full description of what’s on the menu for the full duration of our project. Have a look!

As scrumptious looking as these events and activities are, we can only wonder if, ultimately, they have managed to have any “meaty” content in them. Have they delivered the meaningful experiences that all outreach programmes should have at their core, or have they just looked pretty on their plates? We want to think that this is not the case. Attendance figures and usage statistics so far certainly indicates so, but as with all dinning invitations, that is not for us to say. We are too humble to sing our own praises, and can only wish for the best. In fact, why don’t you have a taste and tell us? There is still time to take part in future events. Just head for the what’s on section of our website here and get all the details. We’d love to know! (#bballadschet)

Library lectures series in partnership with the English Folk Dance and Song Society:

The lectures are organised by the EFDSS as part of their outreach programme and Chetham’s library is acting as a host. Given the EFDSS’s reputation, these lectures have attracted a significant audience of professional folk musicians, interested amateurs and scholars, thus providing us with a great platform to start promoting our collection of ballads and music broadsides amongst this community. Also, in exchange for hosting these lectures, we will give a presentation on “The Ballad of Chetham’s Library” during the EFDSS Broadside Day in February 2018. This free event took place just before the second EFDDS library lectures in order to attract maximum audience. Both events connect via the ballad of Barbara Allen, as an example of how traditional songs have been transmitted throughout the years and become part of the folklore of a community, describing the joys, interests and struggles of their everyday lives. Jennifer Reid’s Talk & Music performance – Manchester and Dhaka: Drawing Links
Jennifer gave a talk about her research trip to India where she studied the similarities between Manchester in the 19th century and Bangladesh in terms of their textile industries and the hard conditions of their workers. She then sang a couple of songs similar to Barbara Allen from her Lancashire-based repertoire, such as Frolicsome Kate.

Printing workshop:
This talk and music performance was followed by a printing workshop where the audience had the opportunity to illustrate their own copies of Barbara Allen (as specially produced by Graham Moss from Incline Press) using rubber stamps designed by Desdemona McCannon and Stephen Fowler. These rubber stamps were created using the woodcuts that appear on our collections of street literature as inspiration. Design competition based on the Axon collection of 19h century ballads:
We have invited members of the public to have fun with the visual aspects of one of our collections and to come up with their own designs for a Christmas e-card / gif, which will feature on our website homepage from December 2017. We have created a dedicated board on Pinterest to highlight those with the most creative potential. All images have links to the original records in our catalogue. Have a look here. Family Storytelling event in collaboration with the Manchester’s branch of the Society for Storytelling “Word of Mouth”, and Graham Moss from Incline Press:

We have invited two professional storytellers, Honor Giles and Helen Stewart, to explore our collections of chapbooks and street literature. They will be choosing two traditional tales each which will be adapted for a modern audience and performed at a family workshop during National Storytelling Week (Jan-Feb 2018). Graham Moss will be producing a facsimile edition of one of our chapbooks here as a counterpart to the oral transmission of these stories exemplified by the storytellers. Little ones (and not so little) will be shown how to make their own chapbooks and finish them with their own hand-drawn illustrations, using some of the examples from Chetham’s library as inspiration. We are also exploring the possibility of creating an online exhibition as an introduction to the project . We would like to offer one of our MA student volunteers to work closely with the digital project officer in order to produce interpretative material about broadsides, ballads and others examples of single-sheet material aimed at a non-specialist audience, which could also be used within a classroom setting.

Possible Broadside Art Exhibition in partnership with the EFDSS and students of Illustration from UCA (University College of Arts, London)
The students will be looking at the woodcut illustrations that usually appear on street literature, and creating their own responses to the text with contemporary versions of the images. They will be using examples from both the EFDSS and Chetham’s Library collections now that they are accessible on-line. It has been suggested that the artwork produced could be exhibited at Chetham’s Library in January 2018. The BBC is currently filming part two of the famous tv series with Kenneth Clark (more details here) and they are looking for museums, libraries and heritage institutions to contribute with events around the subject of “civilisation”. Chetham’s library is the first public library in the English speaking world, which is undoubtedly a very significant event in itself for civilisation, but also the material that forms part of this project, that is “”street literature” is often described as the “social media” of the past, which again, is quite an important concept since “communication”, “the exchange of information” and “gossip” are all part and parcel of civilisation. We would like to offer some Y11 students the possibility to come to the library to see some of the original examples and do a workshop relevant to their studies after consultation with their history teachers. Rare Indulgence from the times of Henry VIII

Further on into the digitisation process, we will send announcements to be included in relevant publications such as the Ephemera Society’s or the Historical Libraries Forum’s newsletters, and we will try to establish online connections with the English Broadside Ballads Archive (EBBA) and the Bodleian Broadside Ballads Online project.