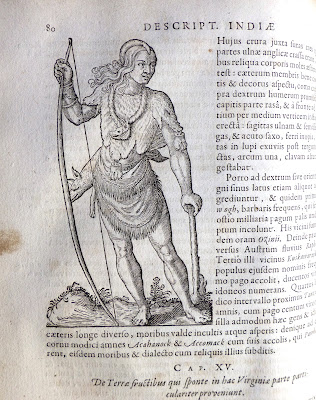 This beautiful woodcut is of Chief Powhatan, otherwise known as the father of Pocahontas, and is taken from this week’s treasure, Joannes de Laet’s Novus Orbis, or History of the New World. The work was first published in 1625, only eight years after the death of Pocahontas, or Rebecca Rolfe, as she became known after her marriage.

If you fancy a copy for yourself, there’s one for sale in the William Reese catalogue, as it happens…