Accidental heroes – getting in on the act 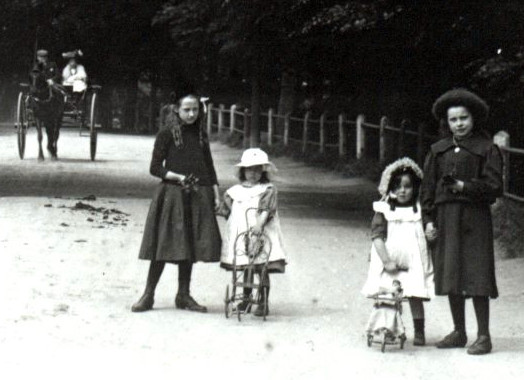 We’re in the midst of the digital portion of one of our current projects, putting swathes of material from our Salford and district collections online. With the help and support of the Booth Charities, one of Salford’s oldest philanthropic organisations, we’ve got a a completely new database running for our archival and manuscript collections, and our Salford collections will star. We’ll be blogging about various aspects of the collections as they go online, and when you search the catalogue in the future you’ll be calling on increasingly large resources.

Today we’ll take a new angle on one of the largest collections of photographs of the Salford area, created and collected by Frank and Elsie Mullineux over many years as they documented the changes of the post-war era with their own cameras, and assembled many older pictures, texts, postcards and other memorabilia of older generations. The collection is justly celebrated, and you’ll probably have seen at least some of their material online – with our new system we’ll be providing full and systematic access to it, and to other collections we’ll come back to in future posts. The Mullineuxs organised their collection by place – Eccles, Worsley, Little Hulton etc. – and by theme – Transport, Chapels, Industries.  There are plenty of portrait and posed group photos, but today we’ll look at small crops from much larger images to capture the ‘accidental’ inclusions of people in shot, like the one above from Winton, somewhere around 1900. Only a tiny area of a shot of ‘the rocks’ at Worsley, but this gent seems pleased

The early photos they collected were necessarily taken with large plate cameras on a tripod, and when spotted the photographer always seems to have attracted the interest of adults and children alike. Some seem to go into ‘pose’ mode, others can look as if they are studying to appear nonchalant. Some late Victorian(?) gents looking a little stiff in a corner of a shot of the then-new Bridgewater Hotel at Worsley Back to ‘the rocks’, Worsley, and two very proud young cyclists want to be seen in this crop. The girl on the right seems to be unsure about getting nearer

Perhaps some suspected they would be playing a bit part for years to come in a commercial postcard for people to send news of the weather, wishes for good health, or used the picture itself as directions for visitors: Young man looking very dapper in this detail from a postcard of Greenleach Lane, Worsley.

In the shot above, the smartly-dressed boy in the new collar and shoes (it must be Sunday) is a fraction of the frame, casual though he’s clearly decided to be. The writer of the card wanted the whole shot to help with routefinding, though: ‘You come up this lane from Worsley Station to our house, it is a straight road over Roe Green, about 20 minutes walk towards Walkden. The railway line to Bolton is on the left of the P.C.’ This little group are central to a postcard commemorating the festivities for the coronation of George V, and evidently conscious of the honour. Children keen to be in one of the Mullineuxs’ shots documenting the changes created by the M62. The theme of the shot is some farm stables, but it’s the doll and the bike for the kids At the edge of shot in a photo commemorating the first electric tram through to Worsley, everyone wants to be in, even the dog on the left. And ‘look at my hoop!’

If the camera was further off, however, and as time passed and snapshot cameras became smaller and less obtrusive, a lot less self-conscious behaviour got captured by the lens. Those documenting buildings and large scenes seem to have avoided getting people in shot as much as possible, rather to our frustration now as we would all like to see how a street-scene 100 years ago really looked. But sometimes people got in there; the next two crops are from the same shot, with everyone going about their business. From an 1890s shot of Barton Road, Worsley – ice cream being served from the cart, and even the horse gets a nose-bag The other side of the street, with a family out in the pony and trap and straw hats for summer

The railway stations, trains and tram stops that drew the photographers who provided the material for the Mullineuxs’ transport collections probably never found their subjects devoid of people in daylight. They may be incidental to the main theme, but they draw us in now – where had they come from? What did they do next? Can you tell a person’s social class from their hat? Buying newspapers outside Eccles Station in this crop Passengers pour off the third-class carriages in Walkden – early 1920s?

We don’t know if Frank or Elsie waited for the ladies below to move out of shot in order to get a clean photo of the factory chimney that was the focus. But if we stay with the conversation in the corner, it looks as if the gossip could continue for a while. Incidental in a corner of a shot of factory chimney, two elderly ladies chat in 1952 On their way to the main road, these three small friends leave the shot as a forgotten detail

There will be plenty more blogs from this project, so feel free to let us know what your favourite themes are. Meanwhile, have any pictures of Salford life you’d like to share as part of this project, or items you’d like to add to our collections? Have you, or would you like to write anything about growing up, working, or living there? See anything you recognise when you search the collections? Please let us know, either comment below or drop us a line by phone or email.