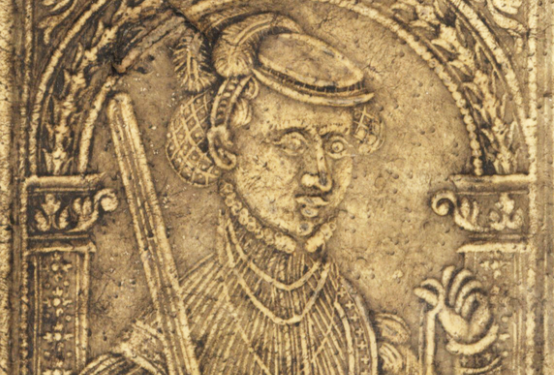 This afternoon’s blog post is the first of two that are a part of the work done by Nathan Shipstone, here with us this year as part of a highly productive and successful placement from his recently completed MA course in Library and Information Management at MMU. Nathan has been imaging historic bindings from the collection and studying them – part two will deal with calf and leather bindings, and we’ll also be adding the images to our catalogue records for the works concerned so that those with an interest in bindings can study them remotely. Nathan writes:

Vellum has been used as a book binding material since the beginning of the printed word and was particularly popular in and around what is now, Germany between the 16th and 17th centuries. This German style of binding incorporated richly decorated vellum stretched over wooden boards to provide both a beautiful and hard-wearing cover. Chetham’s library has several examples of contemporary German full vellum bindings, chiefly from the unique Byrom collection.

The five examples below (dating from 1548 to 1635) all show significant blind tooled detail around a central rectangular panel on their upper and lower boards, accompanied by raised bands on their spines. All the designs features fillets, created by a ‘pizza-cutter’ style of tool that leaves the impression of a straight line across the surface of the binding. Fillets – ruled lines, either single or multiple running in parallel, vertically or horizontally – are used to create borders, to demarcate levels of detail, and, when crossing over one another on the outer edges of the boards, create ‘Oxford corners’. In-between the fillets, especially towards the outer edges of the boards, there is evidence of vertical and horizontal crested and/or floral rolls. These impressions are created by a roller tool that has been engraved in a continuous or repeated design, and run across the surface of the vellum. All five examples feature floral rolls of one form or another, with three (2.I.6.35, C.9.35 and 2.I.7.19) showing highly detailed rolls that contain human character portraits and even words. Although all the examples shown are decorated around a central panel, only two (C.9.35 and 2.I.7.19) feature an original intricate detail left by a blind-stamp. These are created by pressing a hot metal stamp onto the surface of the vellum until an impression is made.

The earliest three (2.I.6.35, C.9.35 and 2.H.6.12), and all from the 16th century, possess metal clasps on their fore-edges; a popular feature of this style of binding that helps combat the tendency of vellum, which is hygroscopic in nature, to warp strongly in dry conditions. These same three also have bevelled edges on their upper and lower boards. Three of the bindings show evidence of previous ownership in the form of ink-stamped initials (C.9.35 and 2.I.7.19) or an armorial stamp (2.I.6.35). All five have inadvertently benefited over time from muck and grime getting caught in the indents left by the blind tooling; bringing out details that would originally have been much harder to perceive.

Although the nature of these five featured works varies considerably in subject matter (from theology, to medicine, and geography) all were considered worthy of the lavish bindings that were bestowed upon them at the time of, or very shortly after, being printed. Johann Strumpf’s work (2.H.6.12) was published in 1548 in Zurich by one of the city’s first printers: Christoph Froschauer. Froschauer’s printing business was the genesis of Orell Fussli publishing house; a security systems company that still trades today. Strumpf was known at the time to be one of the most important contributors to Swiss history and geography, and this particular work of his comprises a detailed history of Europe, annotated with several maps and illustrations.

The central panel on its upper board is not blind-stamped, but instead consists of three vertical crested rolls, bordered by triple fillets. Surrounding the central panel are four concentric layers of floral rolls, each partitioned by triple fillets. The outermost fillets cross over at the edges of the board to create ‘Oxford corners’. The same design is repeated on the lower board. There are two metal clasps on its bevelled fore-edge, with the lower of the two now broken. Victorinus Strigel’s theological work, “The Psalms of David” (C.9.35), was published in Leipzig by Ernst Vögelin, a pioneer of German book printing in the 16th century, whose publishing house was famed for printing Protestant authors. Strigel, an early Protestant theologian, had an academic career that spanned the universities of Jena, Leipzig and Heidelberg, but in being a contemporary of Martin Luther he was no stranger to doctrinal controversy.

Although originally printed in 1563, the upper board of Strigel’s work shows very prominently, stamped in black ink, the initials ‘W.K.’ and the year ‘1565’ at the head and foot of the detailed central panel that depicts the crucifixion. There is a detailed central panel on the lower board depicting Justitia, or Lady Justice, holding her trademark balance in her left hand and a sword in her right. Surrounding the central panel on both boards, partitioned by double fillets, is a double border of pictorial rolls, the inner depicting what appears to be biblical characters and the outer depicting what appears to be biblical scenes. Floral rolls crest the head and foot of each board. In addition to metal clasps on its bevelled fore-edge, there is also evidence of a chain staple mark just above the lower metal clasp on the upper board. Saint Irenaeus, one of the most important figures in the early history of the Christian church, was a vocal critic of heresy: particularly Gnosticism. He penned his famous polemic “Against Heresies” towards the end of the 2nd century, which was reprinted long after his death as it was regarded as one of the best accounts of Gnosticism in existence. This reprint of Irenaeus’ work (2.I.6.35), some 1,400 years after it was first written, was published in 1596 by the Birckmann printing house in Cologne. Established by Arnold Birckmann in the 1530s, by the end of the 16th century his printing house had passed into the ownership of the Antwerpian book trader Arnold Mylius.

The binding design consists of a central rectangular panel, bordered by three concentric crested/floral rolls, each partitioned by triple fillets. The middle crested/floral roll consists of three character depictions: ‘Spes’ (the goddess of hope, holding a spade and sickle), ‘Fides’ (the goddess of trust, holding an unidentified object), and ‘Iustio’ (the goddess of justice, holding a sword and a pair of scales). The central panel on the upper board was originally left blank, with matching floral stamps in each corner, but this space has since been filled by an armorial stamp. The bishop’s mitre and crossed-keys design on the stamp suggest that an ecclesiastical authority had ownership of this work before it came into the possession of Chetham’s library. The central panel on the lower board, however, consists of two vertical crested rolls, bordered by triple fillets. The upper and lower boards have bevelled top, lower and fore-edges, and feature metal clasps that are common with this style of binding. Paraclesus was a 16th century Swiss polymath, who had a keen interest in philosophy and medicine; both of which are found in this posthumous work of his that was printed in Strasbourg at the turn of the 17th century.

The vellum binding on the upper board consists of a detailed central panel depicting ‘Iusticia’, or Lady Justice (similar to C.9.35), holding her trademark balance in her left hand and a sword in her right, with a partial Latin inscription beneath. The lower board, partially faded, has a similar design depicting ‘Lucretia’ who, in Roman legend, was the wife of the first consul of the Republic, Collatinus, who had helped overthrow the Roman monarchy in 509 BC after his wife’s suicide. On both the upper and lower boards, quintuple fillets partition the central panel from three elaborate floral rolls, each in turn partitioned by triple fillets. The inner roll features heads in medallions, the middle roll features the same but names the portraits after the renowned church reformers ‘Eras’ (Erasmus), ‘Phili’ (Philip Melancthon), ‘Mart’ (Martin Luther), and ‘Johan’ (John of Wessel), and an outer roll of interlacing palmettes. On the upper board, there is additional ink-stamped tooling at the head (NVBH) and foot (1605) of the central panel, possibly naming a former owner and binding date, two years after publication. The remains of material ties can be seen on the fore-edges of the upper and lower boards, originally used like the clasps featured in 2.I.6.35, C.9.35 and 2.H.6.12. Oswald Croll was a highly acclaimed 16th century German professor of medicine at the University of Marburg (50 miles north of Frankfurt) who also studied at Heidelberg, Strasbourg and Geneva. He furthered the work of earlier alchemists such as Paracelsus, and inspired later scholars such as Robert Burton and his ‘Anatomy of Melancholy.’ His work, Hermetischer Wunderbaum (3.F.3.49), was published in Frankfurt by Anton Humm in 1635.

The decorated vellum on the upper and lower boards is in much better condition than the other examples shown. It displays three concentric rolls around a central panel featuring a floral stamp bordered by four floral corner designs. Each roll is demarcated by triple fillets. The outermost roll, which is the largest of the three, shows a double interlacing leaf pattern. There are floral bordered panels at the head and foot of the central panel, with blank vellum space left for further tooling. Given its smaller size, comparative to the other examples, it hasn’t the need for metal clasps or material ties to stop the vellum from warping.